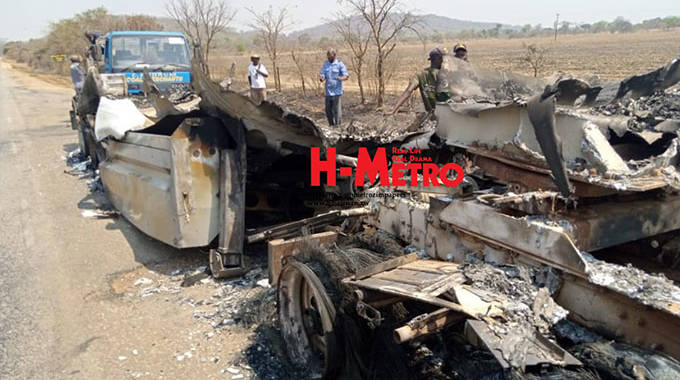 A haulage truck driver was on Tuesday arrested for setting an empty fuel tanker on fire after selling the precious liquid.

Donald Daniel (28), who was detained at Southerton Police Station was arrested by detectives following a review on the vehicle tracker.

Daniel stands accused of draining the fuel from the truck in Kuwadzana and drove an empty truck to Chinhoyi where he allegedly set it on fire.

Andrasdon Investments is applying for the remission of duty on petrol that was lost.

Our tractor unit and tanker were also destroyed on the 29th of September 2021.

The transit load was coming from Beira going to Lusaka.

The driver left Willowvale Truckstop Harare around 6 pm on the 28th of September saying he was going to sleep at Banket in the Chinhoyi area before curfew.

Upon review of lorry movements based on our vehicle tracker, I have noticed the vehicle was driven to an address near the roundabout of Glen Eagles and Bulawayo Roads.

The driver arrived there around 6:45 pm and the lorry was parked in that yard until 11 pm.

The driver then proceeded to leave that address just before 11 pm and claimed our lorry exploded with fuel in it at the Chinhoyi area.

I suspect it was already empty given the four-hour time he was parked near Glen Eagles Road and Bulawayo Road roundabout.

I also suspect the ZIMRA seals were already compromised by the time the lorry was set on fire.

ZIMRA officials have already attended to the scene.

We are appealing to your office for remission of duty as the product was not consumed by us and based on the driver’s movements and communication that night I am convinced it was foul play.

H-Metro reported sources close to the company as saying that Daniel was aware that the tracker was yet to be paid for and the truck owner rushed to clear the bill following the mishap.