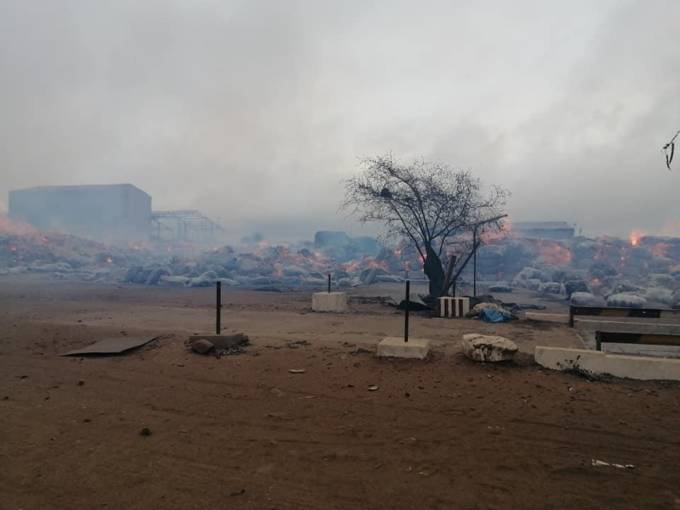 The Zimbabwe Republic Police (ZRP) says it is treating a fire that destroyed cotton lint at Checheche Growth Point in Chipinge South recently as a suspected case of malicious damage to property (MDP).

At least 1.2 million kilograms of cotton lint with an estimated value of US$2.5 million was destroyed by fire at a ginning site at Checheche growth point in Chipinge South on Monday morning.

ZRP spokesperson Assistant Commissioner Paul Nyathi said an unidentified suspect left a note threatening to cause more fire at the scene where more than 5 300 cotton bales were burnt.

A note addressed to one CC was found by the tragedy site threatening to cause more fire if the suspect fails to receive his or her money. Said Asst Comm Nyathi:

Police are investigating a suspected case of malicious damage to property (MDP) following a note found at the site where 5300 cotton bales were burnt to ashes in Checheche.

The incident took place at 0327hrs when a truck driver loading cotton bales parked his vehicle to make a call.

While he was making his call he is reported to have spotted a flame of fire towards his vehicle and the cotton lint was burnt to ashes.

A note was found addressed to CC threatening to cause more fire if the suspect was not going to be paid his or her money within five days.

Investigations have since begun and if the contents of the note turn to be true, the case will be treated as MDP and the law will take its course.