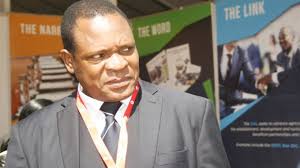 Lands, Agriculture, Fisheries, Water and Rural Resettlement Minister Anxious Masuka has been fingered in a land scam after it emerged that he recently signed a land offer letter for Bornface Naison, a fugitive from the law who fled to South Africa 14 years ago.

Naison was arraigned before the courts in 2007 on allegations of stealing TelOne copper cables, a crime that attracts a 10-year jail term.

He was released on bail and immediately skipped the country and has never been in Zimbabwe since then.

Nhaka Yavatema, a co-operative of disabled people, has since approached the courts over the issue of the offer letter granted to Naison as it holds title to the same piece of land.

The case was heard at Chiredzi Magistrates Court in May where it emerged that despite being a suspect in a serious case and running away from the law, Naison was actually offered what is supposed to be free land by the State.

The 99-year lease signed by Masuka on 11 December 2020 is for 60 hectares at Sub Division 27 of the Hippo Valley North dry land.

Naison and a Chiredzi lawyer Dyson Chirima had filed papers in court to evict Nhaka Yavatema Co-operative members who are using the same land that the two were offered.

Naison is being represented in court by his wife Lorhinda Ingwani whom he gave the power of attorney.

Nhaka Yavatema produced a letter in court which shows that the co-operative was given the same land by Chiredzi Town Council.

The letter was signed by Edson Nyadenga, the council’s Environmental Health Officer.

Meanwhile, the Zimbabwe Anti-Corruption Commission (ZACC) has been investigating a number of cases where senior Government officials including politicians were fingered in illegal land sales.

The Government officials are accused of selling State land on a massive scale.