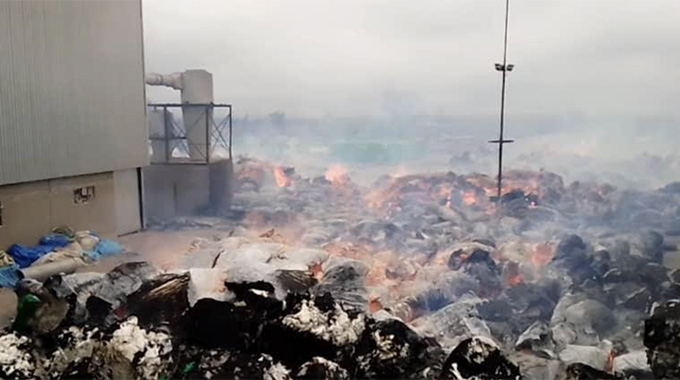 The Cotton Company of Zimbabwe (Cottco) on Monday lost 1.2 million kilogrammes of cotton valued at about US$2.5 million to a fire outbreak that occurred at one of its toll ginning sites at Checheche growth point in Chipinge South.

The fire broke out in the wee hours of yesterday and the inferno was still raging by afternoon as firefighters continued with their efforts to completely extinguish the fire.

Cottco managing director Pious Manamike confirmed the incident, saying the cause of the fire had not been ascertained. He said:

Preliminary assessments indicate that the company has lost about 1 221 000 kg of cotton lint that was ready for export with an estimated value of US$2 500 000. A forklift was also lost in the inferno.

The fire was detected by a truck driver near the ginnery who immediately alerted the guards and management.

Fire tenders from Green Fuels and Hippo Valley were called in to assist extinguish the fire.

The fire-fighting operation was hampered by strong winds that were being experienced in the area at that time.

The cause of the fire has not yet been established and investigations are underway.