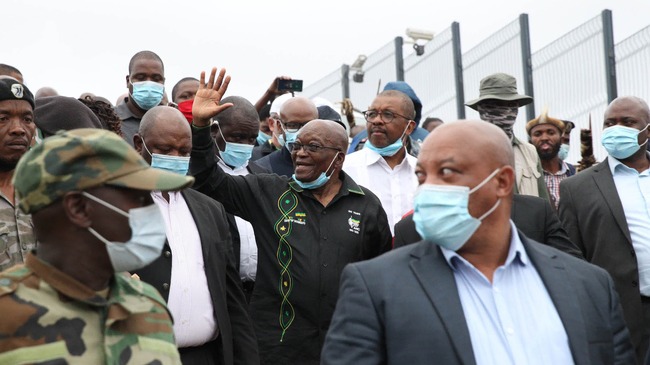 Former South African President Jacob Zuma is allegedly back at his Nkandla home.

He has reportedly been discharged from a hospital in Gauteng where he had surgery for an undisclosed ailment.

This week, it was placed on record at the Pietermaritzburg High Court that an NPA-appointed medical team claimed that Zuma was fit to stand trial.

Zuma’s advocate says the former president continues to be concerned about the alleged leaking of his confidential medical information to a journalist.

It’s being reported that Zuma will return to Johannesburg for further treatment.

Recently, the Constitutional Court dismissed his application to have his 15-month jail term set aside.

He was imprisoned for refusing to appear before the Zondo Commission of Enquiry that is investigating him for corruption he allegedly committed while he was still president.

Advocate Dali Mpofu, his lawyer, had argued in July that his client is the only prisoner in the country who was jailed without trial.

The Constitutional Court dismissed the application to have the sentence rescinded and be set aside.

Zuma is, however, on medical parole after the Department of Correctional Services received and considered his medical report.

According to South African laws, offenders can be granted medical parole if they are terminally ill or are physically incapacitated.