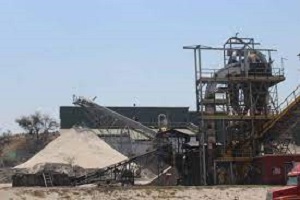 Dorowa Mine in Buhera has phosphate deposits that can last 120 years and if fully exploited and utilised, the country can meet most of its fertiliser requirements.

There are 200 megatonnes (mt) of phosphate deposit at Dorowa, Chipinge Times has been told.

A Cabinet Committee on Food and Nutrition chaired by Vice President Constantine Chiwenga is determined to put to end fertiliser imports that have gobbled US$800 million in the past five years.

The committee has since set up a task force led by the Minister of Industry and Commerce Sekai Nzenza to prepare the commissioning of the fertiliser value chain to promote local production.

Speaking to Chipinge Times recently, Nzenza stated that the government was prepared to support the sole phosphate miner to produce enough phosphate for the production of fertilizer that meets local, regional and international standards. She said:

We are prepared to capacitate Dorowa Minerals with grants and prioritise it for tenders so that they mine to full capacity and help with local fertilizer production.

Industrial Development Corporation (IDC) Chairperson Winston Makamure told Chipinge Times that a limited survey carried out at Dorowa shows that the current quantities of 200 million MT will double to 400 million MT to allow the miner to operate for 120 years.

Dorowa Mine is owned by IDC.

Dorowa acting general manager Charles Mangadze said his company is a key driver for industrialisation and a vital cog in import substitution strategy.

The mine has 200 workers and it produces 150 000 tonnes of phosphate concentrates per year.

Phosphate is important to the agriculture industry as it is used to produce nutrients necessary for crops growth and compound D fertilizer.

One Comment on “Dorowa Mine Phosphate Deposits To Last 120 Years”