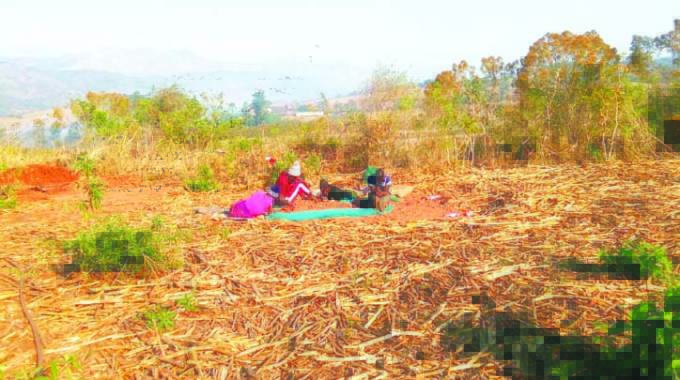 Hundreds of illegal diamond panners and foreign nationals believed to be buyers are flocking to Chimanimani following the reported discovery of alluvial diamonds near Charleswood Farm.

Police officers were deployed to the area to thwart the illegal activities but some panners are reportedly bribing law enforcement agents and Zimbabwe Consolidated Diamond Company (ZCDC) security officials seconded to the area to gain entry.

From what we have gathered, there is nothing much in terms of diamonds being obtained from the areas where the panners are camped.

Some people had already set up flea markets there, but the volume of traffic has increased in the past few days. We hope normalcy will return to the area very soon.

Investigations by The Manica Post revealed that the diamond rush was a confirmation of the recent geographical survey carried out by ZCDC in 2017 in Chimanimani which showed that there is a rich diamond belt stretching from Tilbury down to Mozambique.

Chimanimani Assistant District Development Coordinator, Tawona Nengomasha, also confirmed the development and said land exploration was conducted by the diamond company some time back, but nothing was being done in terms of proper mining. Said Nengomasha:

Samples were extracted by the diamond company on the land in question sometimes in 2016 and the stakeholders involved agreed that the 50 families staying there should be moved.

He said the families were supposed to be relocated to an identified place after they had received compensation first.

Nengomasha added that the process was stalled by Cyclone Idai which hit the district in 2019.

A panner who identified himself as Ngorima said the diamonds they are getting are almost similar to the ones found in Chiadzwa. Ngorima said:

The diamonds are easy to extract since they are close to the surface. While security details were recently deployed here, we are still finding our way to the shafts.

Initially, we were paying them US$1, but they are now demanding US$10 for us to pan at night.

2 comments on “Diamond Rush In Chimanimani”