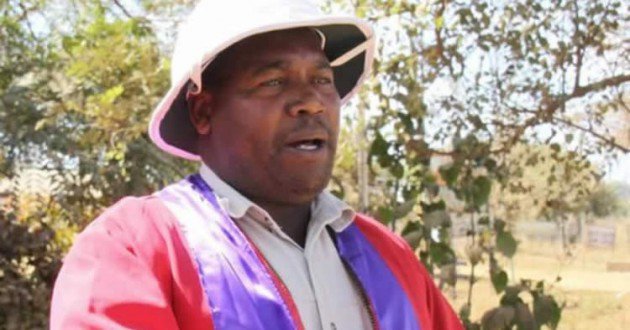 Chief Negomo, real name Luscious Chitsinde, has been dethroned after serving for 14 years as acting chief.

The traditional leader made headlines in 2012 after he ordered now late Prime Minister and MDC president Morgan Tsvangirai two cows and two sheep for marrying in November.

NewZimbabwe.com reported sources as saying Chief Negomo was booted out following a ruling by the Mashonaland Central Provincial Assembly of Chief’s Council.

Since a 2017 resolution for him to step down as acting Chief Negomo from Chiweshe, Chitsinde has been fighting hard to remain as chief.

This is not surprising as chiefs receive a monthly salary and other perks including a twin-cab vehicle from the government.

Reports suggest villagers under the Negomo chieftainship were celebrating his removal as they accused the chief of abusing his power to corruptly amass wealth and livestock instead of solving issues in the area amicably.

Chitsinde, who has publicly expressed his support for the ruling ZANU PF was reportedly heavily involved in the ruling party’s factional fights in Mazowe district and at the provincial level.

He is also reported to have harassed widows and once fined one a beast after her son committed suicide.

Another widow was barred from evicting a fellow villager who had duped her land despite Chitsinde accepting the accused was wrong.

Chitsinde also reportedly failed to repay a US$147 000 loan from local bank CBZ.

Efforts by NewZimbabwe.com to get a comment from Local Government Minister July Moyo were unsuccessful as he was not picking up calls on his mobile phone.