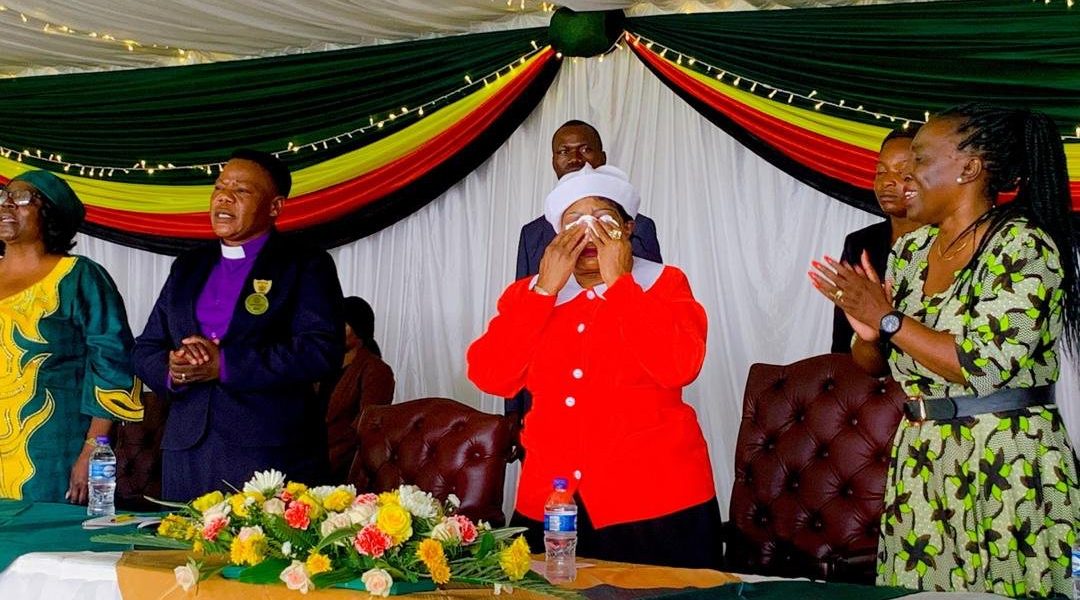 Auxillia Mnangagwa clad in a Methodist Church in Zimbabwe uniform

First Lady Auxillia Mnangagwa Sunday expressed concern over reports of rape and child marriages that are being perpetrated against juveniles in Gokwe in the Midlands province.

She was in the area at the invitation of Chief Njelele’s wife Mrs Virginia Njelele who wanted her to take her Gota/Nhanga/Ixhiba programme.

Mrs Mnangagwa spoke openly against rape cases, early child marriages and other forms of abuse, saying this affected her hence the need to continue raising awareness. She said:

In the Nhanga we heard many issues.

I was pained by the surge in rape cases perpetrated mostly by relatives and where brothers-in-law do horseplay with their wives’ younger sisters against their will.

I was told some parents are covering the abuse after the child would have reported to them. Our Government is against this and chiefs too do not want this in their areas of jurisdiction. We urge you all to report these cases to the police and the local leaders.

Police chief superintendent Tsitsi Chikono acknowledged that rape cases were high in Gokwe and said they were encouraging victims to report so that the perpetrators were brought to justice. She said:

Here in Gokwe, rape cases are on the high side, but what makes me happy is that we work closely with the traditional leadership to have the cases reported…

We have a Victim Friendly Unit (VFU) manned by police officers who were trained to handle such cases.

In one of the cases, a woman is under investigation for allegedly forcing her 14-year-old niece who is now pregnant to marry a 37-year-old villager who regularly bashes the juvenile demanding back a beast he paid as part of lobola.

Gokwe is also seized with the case of two sisters aged four and six who were reportedly raped by an 18-year-old relative.

In a separate case, a 15-year-old girl, who is three months pregnant, walked 62 kilometres to the chief’s homestead after being gang-raped by four of her husband’s relatives and the chief referred the matter to the police where it is now being handled.

Through nhanga/gota/ixhiba programme, the First Lady aims to teach young people the importance of respecting Zimbabwean or African values and culture.