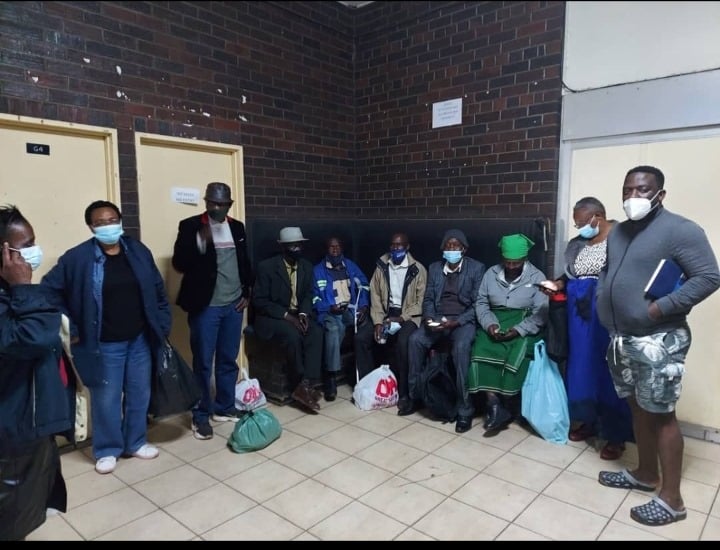 The Zimbabwe Lawyers for Human Rights secured the release of war vetarans who had been arested for picketing at Finance Minister Mthuli Ncube’s offices.

War veterans have apologised to Zimbabweans for allowing the ruling ZANU PF party to use them to terrorise defenceless citizens during elections.

Addressing a press conference in Harare on Monday, chairperson of the War Veterans’ Welfare Pressure Group, Amos Sigauke, said ex-combatants are above partisan politics and should not be used to brutalise supporters of opposition political parties. He said:

Allow us to apologise on behalf of the generality of war veterans for the trauma inflicted on the people during past elections in our name.

The truth of the matter is that a few of our elements were paid and used to terrify people in our name.

We are above partisan politics as we fought to liberate every citizen regardless of their political inclination.

The majority of those misguided elements were not liberation war veterans.

We fought together with the people and our relationship with them was like fish and water.

Sigauke made the remarks after police last week arrested nine of the restive ex-combatants for picketing at Finance minister Mthuli Ncube’s offices demanding an upward review of their allowances.

The war veterans were, however, released without charge following a major outcry.

We wonder how he has made such astounding allegations and we condemn him in the strongest of terms.

We find this utterly disgusting coming from someone who was imposed on us as our chairman.

Maybe the burden of too many portfolios has overweighed him. We hope he will retract his statement, otherwise, he would have to just shut up.

We have nothing to do with political battles and the factional fights in the party. Our concern is our welfare.

War veterans have over the years been making endless demands from the government, which include but are not limited to pensions, medical and dental care, educational assistance, tax and duty exemption, bravery medals and new identity cards, diplomatic passports and automatic promotion of serving veterans of the liberation struggle in State institutions.

One Comment on “War Veterans Apologise For Brutalising Citizens During Elections”