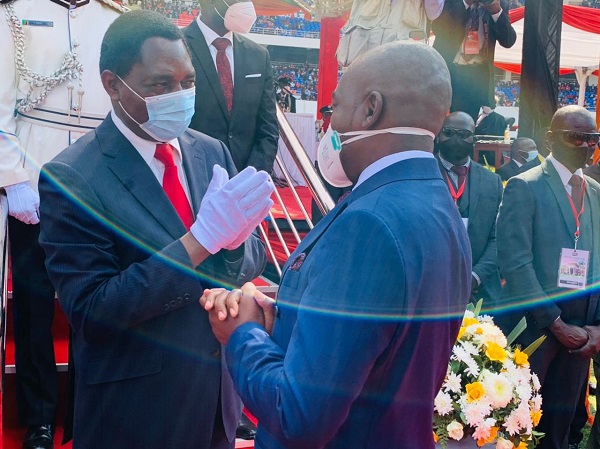 Zambia’s newly elected leader Hakainde Hichilema has been sworn in following his landslide victory over former president Edgar Lungu in the 12 August election.

Hichilema (59), took the oath of office on Tuesday before thousands of jubilant supporters gathered at the Heroes Stadium in the capital, Lusaka.

His victory was hailed as a rare triumph over authoritarianism and a milestone in African democracy.

Addressing thousands of ecstatic compatriots sporting the red-and-yellow regalia of his United Party for National Development and with a Bible in hand, Hichilema declared:

I, Hakainde Hichilema, do swear that I will faithfully and diligently perform my duties … in this high office.

On his sixth bid for the presidency, Hichilema defeated the incumbent Lungu (64), by nearly one million votes.

The victory is the 17th opposition win in sub-Saharan Africa since 2015. It occurred despite restricted campaigning and suspected rigging in favour of Lungu’s party.

Voter turnout on 12 August was nearly 71 per cent, and many Zambians queued late into the night to cast their ballots.

Among the guests were opposition politicians from the region as well as former and current African leaders, including the presidents of the Democratic Republic of the Congo, Kenya, Nigeria and South Africa.

Zambia becomes only the second country in southern Africa in recent years to transfer its presidency to an opposition candidate after Malawi in 2020.

President Emmerson Mnangagwa, who attended the ceremony along with his main rival Nelson Chamisa, has already warned opponents not to harbour similar ambitions.