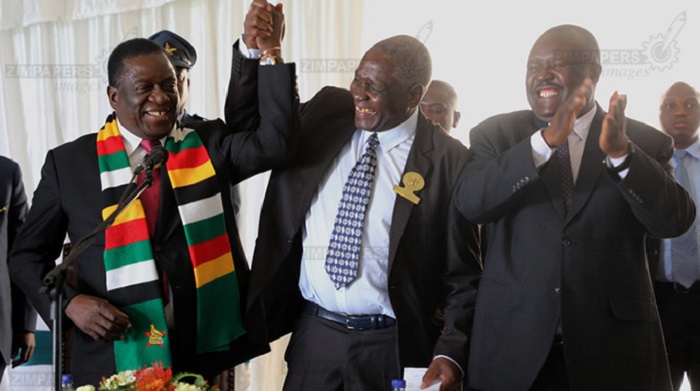 The president met chiefs from Matabeleland at the State House in Bulawayo where they agreed that traditional leaders would lead the exhumation of people killed by the 5th Brigade in the aftermath of independence.

Chiefs from the Midlands Province, which is also the target of the massacres that left approximately 20 000 people, mostly supporters of the late former Vice President Joshua Nkomo dead, were absent from the meeting. Commenting on the meeting, chief Mathema said:

The meeting is meaningless without the involvement of affected chieftainships.

Affected chieftainships should lead the process not an outsider.

The NCC is an outsider in this case.

This issue does not need the chiefs’ council. It does not make any sense to have a chief from Mutare in the NCC, for example, to deliberate on the pains faced by a chief here whose area was affected by Gukurahundi.

Over and above, we know Gukurahundi also affected Midlands but chiefs from there are being denied an opportunity to present their case. There is no sincerity in all this.

If we are serious about this problem, affected chieftainships must be part of the process.

Effie Ncube, a Bulawayo-based human rights activist said it was wrong for people implicated in the Gukurahundi atrocities – ZANU PF and the State – to lead the process meant to address the issue.

Ncube said there is a need for a standalone independent international commission for the purpose of addressing Gukurahundi and the state should only provide an enabling environment for the commission to do its work.

Mbuso Fuzwayo of Ibhetshu LikaZulu, a Bulawayo-based pressure group reiterated that Mnangagwa was not genuine in his approach and urged “all people” to reject the process.