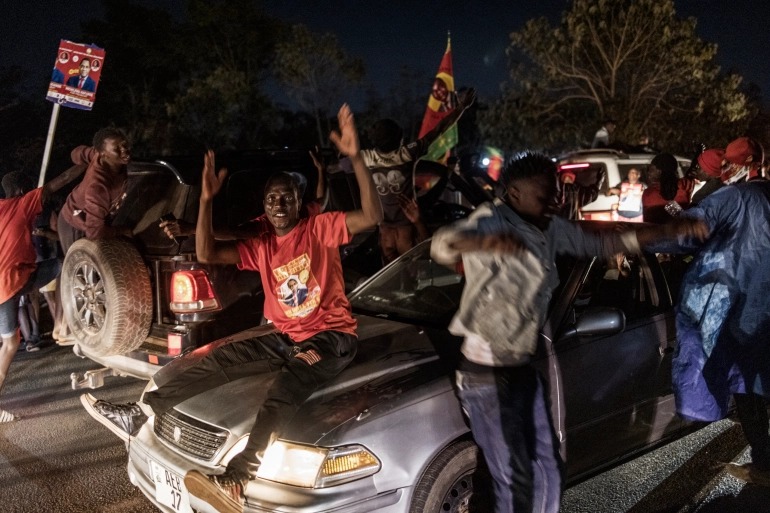 Supporters celebrate in front of the home of Hakainde Hichilema, declared the winner of Zambia’s elections [Marco Longari/AFP]

With 155 of 156 constituencies reporting, Hichilema, the United Party for National Development (UPND) leader, secured more than 2.8 million votes, while Lungu of the Patriotic Front (PF) was in second place with over 1.8 million votes in the vote held last Thursday.

Hichilema (59) had been leading in exit polls and preliminary election results released throughout the weekend.

I, therefore, declare the said Hakainde Hichilema to be president-elect of the Republic of Zambia.

The significant win sparked celebrations on the streets after an election marred by sporadic violence.

The election marked the sixth time Hichilema had run for the top job and the third time he had challenged 64-year-old incumbent Lungu.

Lungu, who has been in office for six years, faced the electorate amid growing resentment about the rising cost of living and crackdowns on dissent in the southern African country.

Hichilema enjoyed the support of 10 opposition parties at Thursday’s vote under the banner of his United Party for National Development (UPND), the largest opposition in Zambia.

In a statement issued through the president’s office last week, Lungu claimed the election was neither free nor fair due to incidents of violence reported in what are traditionally Hichilema’s stronghold.

In terms of the law, if Lungu wants to settle a dispute or nullify elections, he must approach the Constitutional Court within seven days to lodge a complaint after a winner is announced.

Meanwhile, international election observers have commended the transparent and peaceful organisation of the polls but condemned the restrictions on freedom of assembly and movement during the election campaign.

Voter turnout was estimated at just more than 70 per cent.