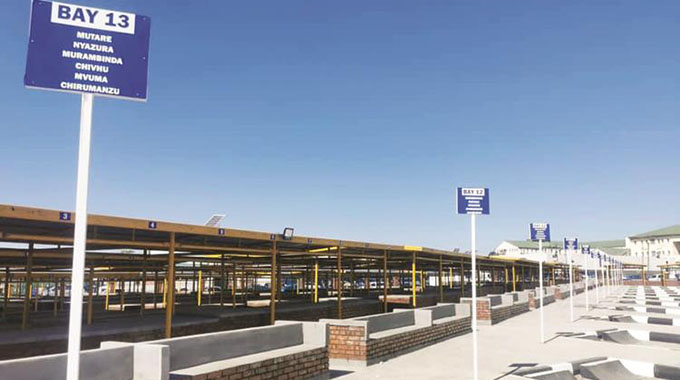 The Kudzanayi Long Distance Bus Terminus in Gweru is now open to the public following a major upgrade of the facility which commenced last year.

The terminus was closed last year for an upgrade after Gweru City Council partnered with a private contractor, Bentach Resources.

We have opened the new Kudzanayi Bus Terminus but only at 20 per cent capacity for now in line with the COVID-19 regulations.

We are, however, still to open doors for buses for both cross-border and local travel due to the existing ban on intercity travels, once the ban is lifted, the buses would start using the bays.

He said buses and omnibuses are not allowed to use the new state of the art facility until Government lifts the intercity travel bans.

He said at full throttle, the rank will be able to accommodate 800 vendors and more than 400 buses.

He said vendors dealing in vegetables are paying $300 per day while merchandisers pay $400 per day.

Hardware and mini-shops will pay $650 per day while those roasting maize cobs and groundnuts pay $150 per day, all the fees were pegged in consultation with the vendors.

Long-distance buses will be paying $1 500 for using the bays while cross border buses will be forking out $2 000 for landing a bay in the terminus.

Meanwhile, the vendors said the new charges were beyond their reach.

Lilian Mbetu, who has been a vendor at Kudzanayi bus terminus for 13 years said she could not get a vending stall after she failed to raise the $7 000 which was required for the deposit.