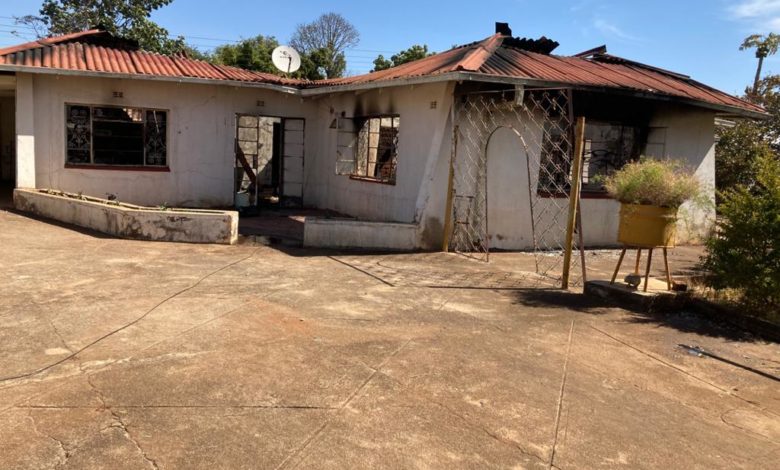 Trevor Nyamakawo (29) torched his family home in Queenspark suburb, Bulawayo and threatened to axe his family on Friday 30 July 2021.

An axe-wielding Bulawayo man set his family home on fire following a dispute with his mother claiming that he was the owner of the property.

Trevor Nyamakawo (29) torched his family home in the Queenspark suburb and threatened to axe his family members if they resisted his orders to vacate the house.

Bulawayo police spokesperson Inspector Abednico Ncube confirmed the incident and said they were treating the case as malicious damage to property. He told CITE:

I can confirm that we received a report of malicious damage to property. The accused person, who is still on the run, had a dispute with his mother.

He was claiming that the house they are staying in belongs to him and they should remove their property.

He threatened to kill his mother. The mother then went and made a report to the police. When she returned around 14:30 PM they found the house already in flames.

A fire brigade was called and they put out the fire. The value of the lost property is yet to be established.

Trevor’s mother, Molly, narrated that her son had only returned home on Tuesday after being in South Africa for two years. She said:

Trevor is my oldest son. After my husband’s death some years ago I raised my children on my own.

Yesterday (Thursday) morning he was smoking dagga and cigarettes in the house.

I then rebuked him, reminding him that we have a newborn baby in the house, so smoking would affect it.

She said Trevor did not take this well so he started shouting at everyone, throwing them out of the house and threatening to kill them.

Molly said after her first attempt to calm him down she rushed to the police to report him but the police did not do much to assist her. She said:

He calmed down a bit after I had talked to him. I was still worried about his behaviour so I rushed to the police station.

They gave me one officer who was dressed in civilian clothes to accompany me but when we got home he ridiculed him and started his threats all over again.

I ran back to the police and they gave me two more uniformed officers. When we arrived, he was more violent than before.

The officers got confrontational with him, I warned them several times against it because I know how he is when he gets angry but they didn’t listen to me.

After the harsh verbal exchange with the police officers, Trevor reportedly threatened to burn the house down and the officers told him to go ahead and that was when he set the house ablaze and climbed on top of the roof. Added Molly:

He was there. On top of the roof. He was daring us to come into the house. The police restrained everyone from going into the yard.

There are some neighbours who were offering to help but the police barred them. They really let me down.

I got no help from them. I watched my house burn down.