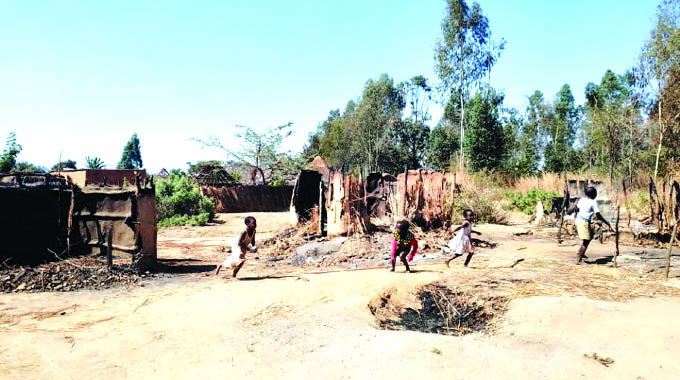 The Tauzen homestead at Ledbury farm in Matepatepa is now a childrens’ playground after the family was displaced following destruction of all their houses by fire. Picture: The Herald

Villagers who were resettled at Ledbury Farm in Matepatepa in Bindura are now sleeping in the open at night after a mysterious fire gutted more than 30 homesteads.

There is now speculation in the village that there could be someone using Sandawana, a goblin believed to bring good fortune to one person at the expense of others.

One of the villagers, Amai Chipo, whose homestead has not been affected, described the fire as a ‘silent’ fire that starts at the rooftop inside the house and is only identified when the house is already engulfed.

The village head, Antony Chipandire said the immediate need of the affected families are tents so that they have shelter. He said:

However, our major need is for the problem to be solved. We were resettled at this farm in 2001 and we have never witnessed such an incident.

This is a mysterious event and we are appealing for help to have the problem solved.

I was in Mbire on a work-related trip when I received a call that houses were mysteriously burning down. I cut short my trip and came back home.

I went to Chief Negomo’s homestead to inform him of the events and he called a spirit medium who said one of the community members used sandawana juju for money-making rituals.

The Chief gave us people to perform traditional rituals at the compound. The following day prophets who were sent by the Chief arrived and said they were afraid to point at the culprits without adequate security.

A lot of prophets volunteered to assist us. We received prophets who came through the radio and I was made to collect ashes at every burnt down house and put them in a clay pot. That was the longest night of my life.

Chipandire said after two days, the prophet came back and cleansed the pot saying the problem was solved. He added:

They raised the cleaned clay pot and started praying until smoke came out of the pot. They smashed the pot and said they had solved the problem.

Before they left the compound a grass precast wall caught fire and afterwards another house caught fire.

We decided to approach Chief Masembura and he did some rituals. The problem subsided for two days and the fire started again.

We went back to the Chief and he summoned spirit mediums who said some people in the community have used juju.

The spirit medium performed some rituals and for now, the fire has subdued for four days now.

A lot of rumours are going around in the compound with some saying the first fire victims are the juju culprits, these are just rumours.