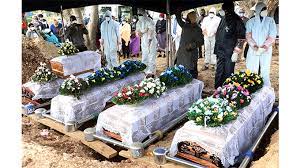 Five Mkandla family members including a child, who died in a horrific car accident in South Africa were laid to rest at West Park cemetery in Bulawayo on Saturday, 24 July 2021.

Five family members of the Mkandla family who died in a horrific car accident in Polokwane, South Africa were buried at West Park Cemetery in Bulawayo on Saturday.

A malayitsha friend identified as Vusumuzi ‘Makukisi’ Mhlanga who was accompanying them, also died in the accident.

The five bodies arrived in the city at about 1.30 pm due to delays experienced at the border and a short funeral service was held at Doves Funeral Parlour.

Speaking at the family house in Entumbane, family representative Isaac Ncube said the death of their children was a life-changing moment for the family. He said:

What is sad is that the father of these children also died in a sad way and his body never entered his home.

To have his children also dying in this manner and not being taken to their homes is painful to us.

We need psychological support, especially the mother. If she doesn’t get counselling it will be a disaster.

The Government provided support to the Mkandla and Mhlanga families with each body receiving ZWL$10 000, while the Government also said it will reimburse the money used to transport the bodies from South Africa.

The five were laid to rest side by side in four graves with Nomasiko Mkandla being laid to rest with her son on top of her coffin.

Meanwhile, the sixth person who died in the same accident, Vusumuzi ‘Makukisi’ Mhlanga (37) from Magwegwe West in Bulawayo, was also buried at Athlone Cemetery yesterday.

According to The Sunday News, the six died when their car was involved in a head-on collision and during the process, another car rammed the side of their car.

They were trapped and emergency services in South Africa had to cut open the car to retrieve them.

Three of them died on the spot while Thulani, the car owner and the one who was driving when the accident happened, was thrown out of the vehicle on impact and died in hospital.