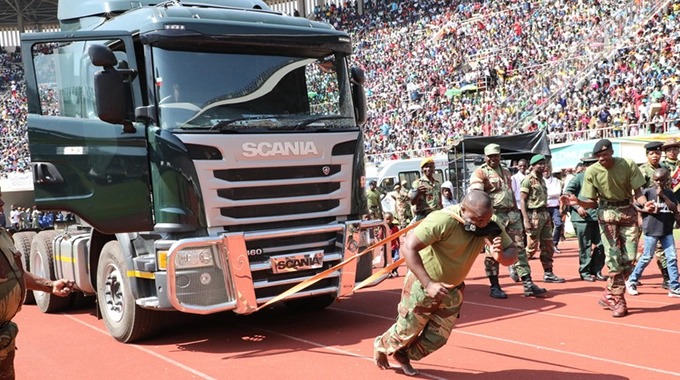 File Pic:Jonathan Muvingi pulls a haulage truck with his mouth during this year’s Zimbabwe Defence Forces Day celebrations at the National Sports Stadium

The man who is thought to be the strongest in Zimbabwe, Jonathan Muvingi, has been invited to take part in the African Kurash Championship to be held in Cameroon next month.

Muvingi (32) is the national professional wrestling champion in the Open category.

The 120kg athlete became is the first man to pull a 30-tonne truck in recent years.

His management team confirmed Muvingi’s invitation to the kurash championship in a statement. It said:

Jonathan Muvingi has been invited to compete in the African Kurash Championships to be held in Cameroon from the 26th to the 30th of August 2021.

He is eager to compete in these championships and has been training on his own ahead of that tournament.

Muvingi has become popular for pulling train wagons and other stunts. It’s now his time to shine at the international level and help hoist our flag high.

He is now appealing for financial assistance from the corporate world and individuals to help sponsor his trip to Cameroon.

Muvingi’s team said the athlete is unable to foot the bill himself, but he is eager to raise the national flag high in Cameroon and bring back some medals home.

It said the final date of registration is the 2nd of August 2021.

Muvingi said he is ready to explode in Cameroon and the tournament offers him “a huge opportunity for me to show the world what kind of stuff I am made of.”

The last time that Muvingi competed in an international event was in January 2020 when he won a bronze medal in the World Wrestling Championships held in Iran.