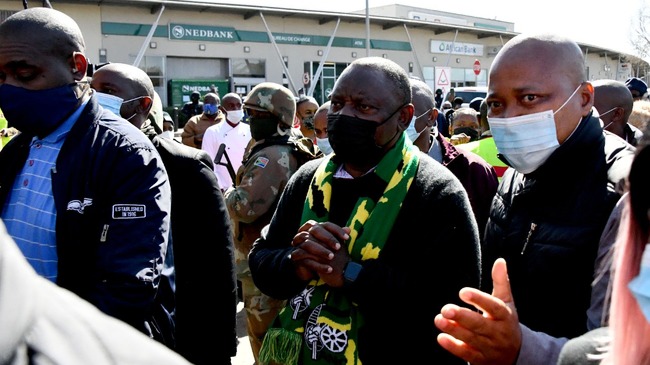 President Cyril Ramaphosa on a visit to Soweto in his capacity as ANC president as part of the party’s Mandela Day programme. Picture: GCIS

South Africa’s president, Cyril Ramaphosa, on Sunday said the people who organised the recent violent protests and looting in Kwazulu-Natal and Gauteng provinces were highly organised.

Speaking to Soweto residents during a visit to the township in his capacity as ANC president as part of the party’s Mandela Day programme, Ramaphosa said the protest organisers “came with guns and grinders and they came to attack our democracy”.

He was there to help clean up three malls affected by the violence and looting that gripped the country for more than a week and that claimed more than 200 lives.

Ndofaya Mall, Jabulani Mall and Maponya Mall were largely affected when some Soweto residents forced entry into stores located in the malls and began looting goods.

On Ramaphosa’s first stop in Ndofaya [where eleven people died during a stampede], he briefly cleaned up a section of the mall. He then spoke to the crowd, expressing regret for what had taken place. He said:

We have learnt important lessons. That we must tighten up our security forces and we must ensure the defence of our democracy is firmly in the hands of our people.

The people who organised this were so well organised, they came with guns and grinders and they came to attack our democracy.

Ramaphosa said he will shake up his ministers responsible for security after earlier admitting that the state had not acted as soon as it should have to stop the unrest.

The violence erupted after former president Jacob Zuma was jailed after being sentenced to 15 months for contempt of court after snubbing the Zondo Commission of Inquiry into state capture.