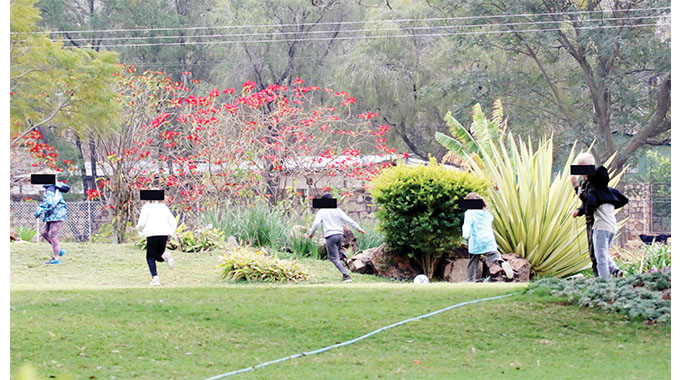 Pupils attending lessons at a private pre-school in Hillside, Bulawayo play in the school grounds on 16 July 2021. (Picture Credit: Bulawayo).

Investigations by the Chronicle on Friday established that one of the schools that have been conducting lessons, Absorbent Minds Pre-School in Hillside suburb, is allegedly unregistered.

The other school which is defying the lockdown is Drummond Ranch in Burnside but it could not be established if the school is registered.

An unsuspecting teacher who was monitoring children at Drummond Ranch openly admitted to a Chronicle news crew that they were conducting physical lessons. Said the teacher:

Unfortunately, due to COVID-19 regulations, we are not taking new pupils. Of course, we are conducting lessons and we have 12 pupils attending our classes from Monday to Friday.

When the journalists later identified themselves and sought contacts of the owner of the school, one Mrs Toni Drummond, the teachers changed their story.

She said they were not conducting any lessons, but were providing bike lessons which they conduct every Friday.

At Absorbent Minds Pre-School, children were reportedly playing in the garden and a teacher who declined to reveal her identity said they were not conducting physical lessons but the pupils had gathered for a birthday party.

Under the enhanced level four lockdown regulations recently extended by President Emmerson Mnangagwa by another two weeks, sporting activities and all public gatherings, including parties are banned.

He said the Ministry will institute investigations to establish whether the two Bulawayo schools are on the list of those registered.