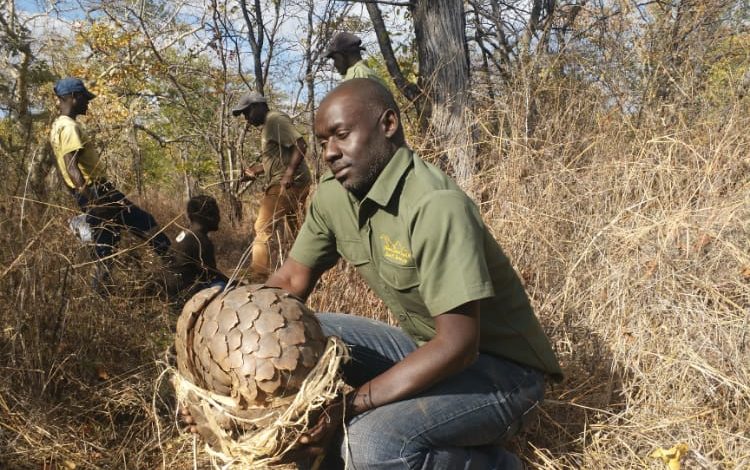 Two poachers who were in possession of a female pangolin weighing over 13kg were nabbed by wildlife activists in Hwange on Thursday last week.

Farm 52 manager in Lobangwe, Matetsi under Hwange District, Wisdom Bushe Neshavi, told CITE that members of the voluntary anti-poaching programme, which he runs, caught the poachers. He said:

Our voluntary anti-poaching programme is aimed at taking care of wildlife and educating others about the dangers of poaching.

While doing their rounds, a patrol team made up of two locals, Skhumbuzo Mathe and Aristotle Tusai picked up poachers’ prints at Katuna Farm around 7 am yesterday.

The patrol team also found the poachers’ base camp in the bush where there was a pangolin jacket, meaning hunting pangolins could have been their everyday job.

Neshavi said the humongous pangolin weighed in excess of 13 kilogrammes and is one of the biggest finds in the country. Said Neshavi:

The rescued pangolin weighed 13.635 kg and was taken in by officials from Wildlife Trust Victoria Falls for rehabilitation.

The biggest pangolin ever seen weighed 15 to 16 kg and this one is one the biggest in Zimbabwe, if not Africa.

The rehabilitation is to manage the pangolin’s stress levels, making sure it’s not cheeky and not traumatised.

It will then be released to my care to be let loose in the wild again.

When the two poachers were caught, they claimed they wanted to eat the animal but Neshavi dismissed their claims. He said:

If they wanted to eat it, they would have killed it already. The poachers keeping the pangolin alive means they had a buyer for it. A kg of pangolin costs roughly US$500.

The wildlife activists handed over the poachers to Hwange police and will likely be charged with contravening the Parks and Wildlife Act.

Pangolins are protected under the Zimbabwe Parks and Wildlife Act, and the country has one of the strictest laws against pangolin poaching in Africa.

Pangolins are protected by law and possessing or dealing in them illegally attracts a prison sentence of up to 12 years, according to the Zimbabwe Parks and Wildlife Management Authority (ZimParks).