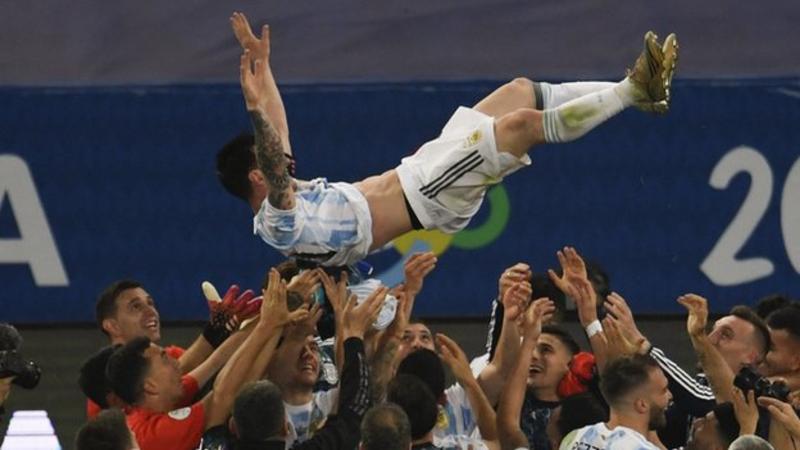 The Argentine captain, now 34, also helped end his country’s 28-year spell since they last won the competition and was named player of the tournament after his four goals in the competition.

It has been 15 years since Messi first represented Argentina at a major tournament and after four World Cups and six Copa America appearances.

Messi’s maiden senior trophy with his country will go a long way to silencing those who had questioned his impact on the international stage.

Repeated failures with Argentina have been painful for the forward, who went as far as announcing his retirement – before later reversing the decision.

Messi had announced his retirement after losing a second consecutive Copa America final in 2016, his third defeat in the final of the competition and coming just two years after suffering a loss in the 2014 World Cup final.

Against Brazil, Messi was not explosive, with few opportunities to get on the ball after Argentina showed defensive resolve once taking the lead, but he carried the ball well, particularly in the later stages, to help relieve pressure.

The only goal of the match was scored by PSG winger Angel Di Maria when he lobbed the ball over Ederson Moraes in the 22nd minute after taking down Rodrigo de Paul’s lofted pass.

Messi had a chance to sign off the win but slipped with the goal at his mercy.

Defending champions Brazil were disappointing, with their only chances of note coming when Richarlison and Gabriel Barbosa forced saves from Emiliano Martinez.

The game was watched by a small crowd of 7 000 invited guests, because of COVID-19 restrictions, but was the first of the tournament to have spectators in attendance.