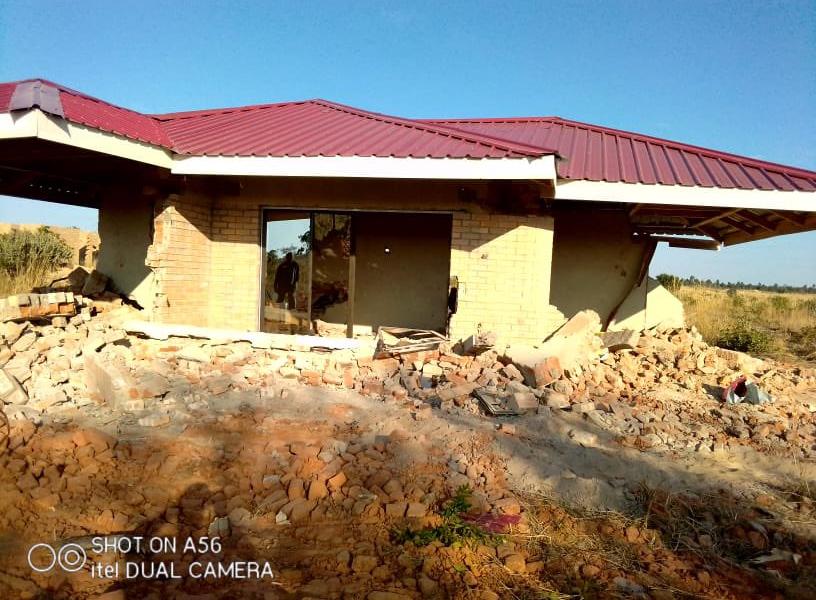 Hundreds of residents of Diamond Park, a settlement in Melfort between Harare and Marondera were left homeless after their houses were demolished by Goromonzi Rural District Council this week.

The Ministry of National Housing and Social Amenities said in a statement that the settlement was illegal and the courts ordered that the area be vacated six months ago.

It said the developer and residents of Diamond Park were subject of a court order six months ago to vacate the area but ignored it.

The Ministry further stated that the developer, Eastwinds Properties, knew the settlement was illegal two years ago and was ordered almost a year ago by Government to stop selling stands. The statement read in part:

The Melfort land in question was occupied by a company called Eastwinds Properties represented by Rodger Pote in 2018.

In an attempt to develop the land, the company parcelled out pieces of land at a premium whilst not providing the requisite offsite and onsite infrastructure.

On December 1 2019, the then ZANU PF chairman of Mashonaland East and Minister of Transport, the late Hon Joe Biggie Matiza, called for a Melfort stakeholder’s meeting to find a lasting solution for the illegal settlement.

In that meeting, the Ministry of National Housing and Social Amenities was requested to include Melfort in its regularisation agenda.

This decision was arrived at based on the understanding that the developer was a holder of a genuine and legitimate offer letter or Development Permit from Government.

After the meeting, the Ministry of National Housing and Social Amenities commenced its Melfort regularisation programme.

As plans progressed, the Ministry of National Housing and Social Amenities received numerous adverse reports from various stakeholders, including reports of an ongoing legal battle between the developer and Goromonzi Rural District Council.

The legal battle revolved around the ownership of the land between the developer and Goromonzi Rural District Council which falls under the Ministry of Local Government and Public Works and.

The Goromonzi Rural District Council disputed the authenticity of the developer’s permit.

The Ministry said it then wrote to Eastwinds Properties on September 22 last year instructing the firm to immediately stop selling any further land to home-seekers and to discontinue all developments until all legal matters were resolved. It said:

The legal matters between the two parties have since been settled and a judgement was handed down by the Goromonzi Magistrates Court on 4 December 2020.

The court ordered that the defendants and all those claiming rights of occupation of stands at or within Melfort township, Goromonzi, be forthwith ejected from the stands.

The plaintiff (the council) or the Messenger of Court, and if necessary with the assistance of the Zimbabwe Republic Police, are authorised to demolish all illegal structures built by the defendants and all those claiming rights of occupation through them at within Melfort township, Goromonzi, and the defendants shall jointly and severally pay the costs of the legal action on an attorney and client scale.

3 comments on “Hundreds Of Houses In Diamond Park, Melfort Demolished”