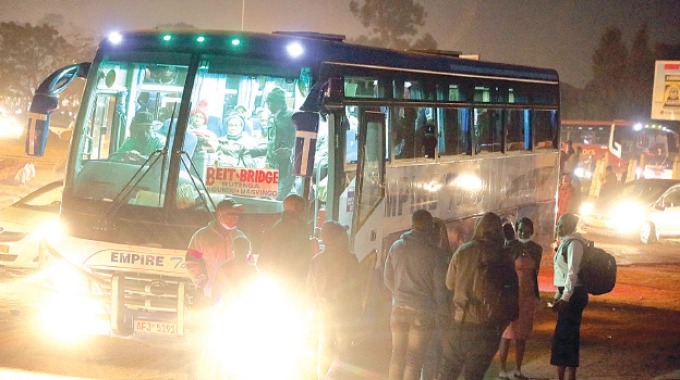 Passengers board a bus to Beitbridge at Mbudzi roundabout in Harare during the night (22/06/21), breaking the 10pm-6am curfew imposed by the Government to curb the spread of Covid-19. — Picture: Justin Mutenda.

Police in Mashonaland West Province, where several districts are under lockdown, have impounded some pirate taxis and at least nine intercity buses including two ZUPCO buses for flouting lockdown regulations.

Drivers of the pirate taxis plying the Chinhoyi-Karoi, Chinhoyi-Mhangura, Chinhoyi-Harare and Chinhoyi-Chegutu routes were arrested while the buses were taken to Chinhoyi Central Police Station.

As police, we are conducting patrols and as we speak, along the Harare-Chirundu highway, we have nine long-distance and intercity buses that have been impounded and are currently at Chinhoyi Central Police Station.

Among these buses include two Zimbabwe United Passengers Company (ZUPCO) buses that were operating intercity routes against COVID-19 regulations.

We are not allowing intercity buses to cross these hotspot districts.

Provincial development coordinator and CPU chairperson, Josphat Jaji said they have noted with concern that from the COVID-19 fatalities that the province recorded, all people were not vaccinated.

He pleaded with provincial heads to lead by example by taking the jab to lessen the severity of the virus.