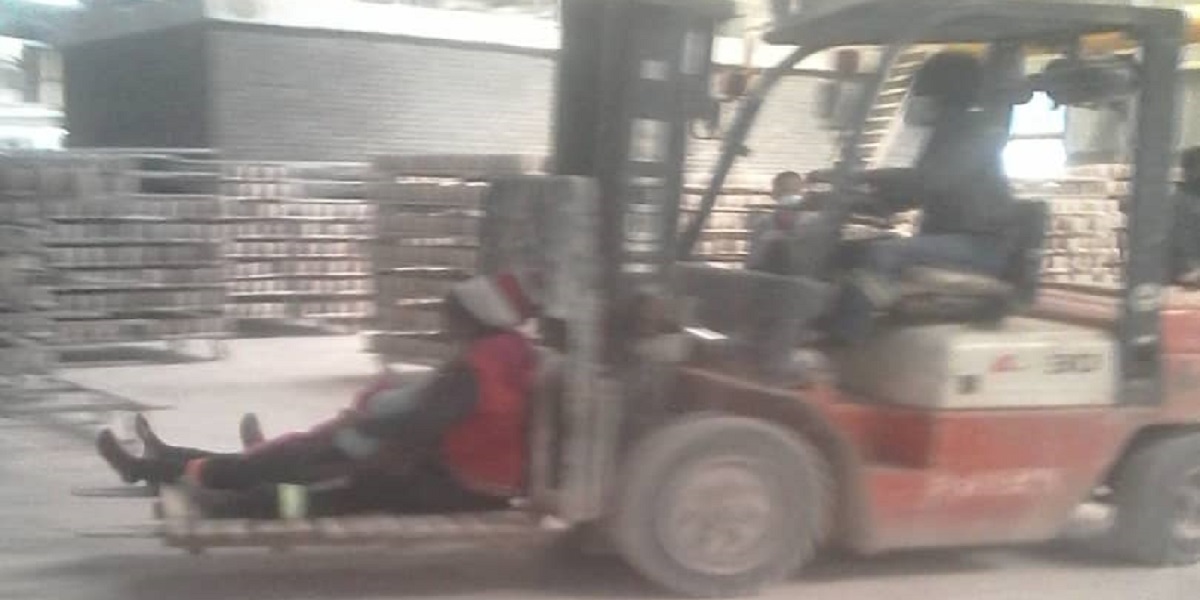 Sunny Yi Feng Tiles based in Norton has denied reports of ill-treatment of workers that were made by the Zimbabwe Congress of Trade Unions (ZCTU).

ZCTU had posted a photo of a woman who had allegedly fallen and was being ferried in a forklift saying that was ill-treatment of workers.

The Chinese-owned company, however, refuted the claims suggesting ZCTU had a hidden agenda adding that the tiles company was conforming with labour laws. Pindula News present the statement issued by Sunny Yi Feng Public Relations Officer Abel T Mukumba in response to the ZCTU’s reports of ill-treatment of workers.

_Sunny Yi Feng Tiles (Zimbabwe) Pvt Ltd wishes to advise our valued stakeholders and the public on the distortion of its image by ZCTU. In a way their publications carry single stories from uninformed sources, who rather than being constructive are more destructive to the image of our company. From the onset, its reports and actions have been influenced by actions of conspiracy as a result of revenge distortion._

_We feel our brand’s image is subject to abuse by these uninformed sources. It’s indeed an act of injustice to turn an opinion of our organization into a fact and make that a conclusion. At first, we welcomed ZCTU as an organization that had constructive ideas of compliance to the Zimbabwe Labor Act but later on their actions turned more of inciting ideas of disgruntlement. We value peace and stability in the community and we are dedicated to the continuous development of the economy of Zimbabwe through full compliance. As we speak, we are affiliated to NEC for Ceramics, which governs our operations._

_It should be noted that “imposing” community organizations in another organization without mutual agreement to pursue hidden agendas is an act of corporate bullying. We are open to getting advice from all our stakeholders with ideas of mutual benefit and development._

_Noting the disrespectful nature of ZCTU on issues on labor relations, we encourage it approach National Employment Council for Ceramics, which we are affiliated to on all matters to do with compliance to the labor Act of Zimbabwe and all our local authorities including the local police. Sunny Yi Feng Tiles (Zimbabwe) Pvt Ltd however remains being the biggest Ceramic/Porcelain manufacturing industry in Southern Africa and will always be committed to giving the best quality services to its various stakeholders._

In response, ZCTU was adamant that there was some ill-treatment of workers at Sunny Yi Feng Tiles and they had no other agenda besides that of ensuring the safety of all workers. Tagging the International Trade Union Confederation (ITUC) in a social media post, ZCTU said:

We only have one agenda:

To ensure that our brothers and sisters’ dignity is restored and the rights of workers are respected.

Use professionals to reform your practices, systems and follow the labour laws and you will not hear from us.

We challenge you to invite the media and show them where your workers eat, sleep and their toilets Allow the media to interact freely with your workers and get the workers’ views Allow Ministry of Public Service, Labour and Social Welfare inspectors, Zimbabwe’s National Social Security Authority (NSSA) inspectors and Zimbabwe Human Rights Commission investigators to find out for themselves.

We have been in existence working with different employers and representing different workers since 1981. We want successful companies and value investments. But we don’t tolerate the abuse of workers. Treat our brothers and sisters as human beings, not as animals and we leave you.