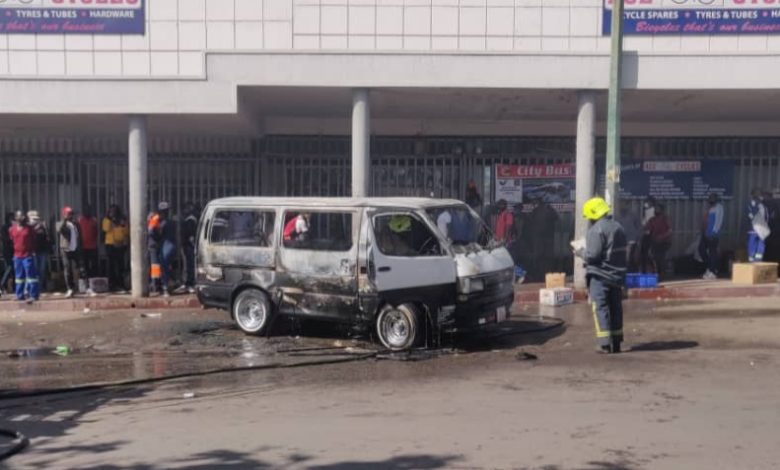 The owner of one of the two commuter omnibuses (kombis) which were burnt to shells on Wednesday following fierce clashes with the police in Bulawayo’s city centre said that he lost his only source of income.

Louis Tshuma (37) of Lobengula West told CITE in an interview on Thursday that he purchased the vehicle using a bank loan and he was still in the process of repaying the loan. He said:

This was my only kombi. I took a bank loan in 2014 and I am in the last year of paying back the loan. I am just speechless. I was called by my driver to the scene. I am actually still in a state of shock as it is.

The thing is I can’t even ask my driver questions like what really happened because he is also in a state of shock, if you saw the video, he actually escaped the teargas, I have to wait for him to be calm down before we can talk.

Tshuma added that he was yet to receive official communication from the police concerning the incident. He said:

I am still waiting for official communication from the police because at the moment they haven’t said anything to me.

My driver is the one who was told to report to the police today (Thursday) but when he got there, they told him the police handling the case went to court.

If the police contact me, I will take it from there but if they are quiet there is nothing I can do.

Right now, they are saying they are investigating so I can’t fight a losing battle because the way they are putting their facts is not straight, they have so many contradicting facts.

The government banned privately-owned commuter omnibuses last year after the country declared a nationwide lockdown in an effort to curb the spread of the novel coronavirus.

Tshuma, however, said he could not afford to park his vehicle as he is the breadwinner in his family and has to provide for them.