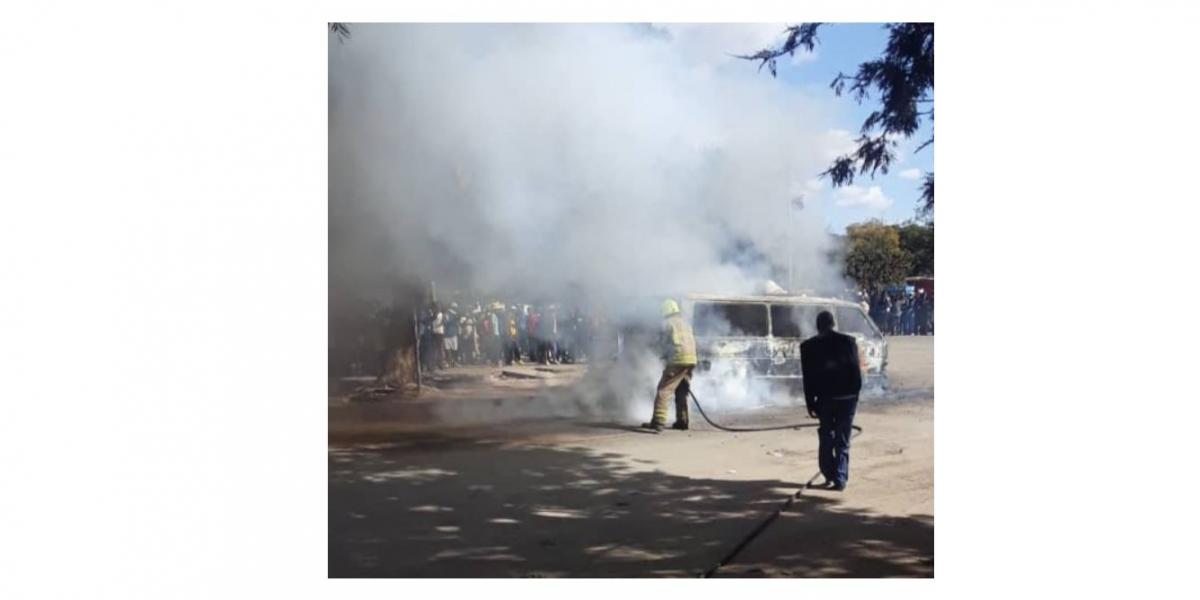 Two pirating kombis were burnt to ashes in Bulawayo after police officers threw tear gas canisters into the vehicles during a high-speed chase on Wednesday.

CITE was told by eyewitnesses that the police officers who were travelling in a Ford Fiesta were pursuing the two kombis in the city centre when one of the kombis rammed into a stationary vehicle along Herbert Chitepo street and Fifth avenue.

After the accident, the police reportedly fired a tear gas canister into the vehicle forcing the driver and conductor to abandon the vehicle before fleeing on foot.

They then pursued the other vehicle and caught up along Fourth avenue where they also fired another tear gas canister inside the vehicle.

Both vehicles caught fire and were burnt to shells.

When a CITE news crew arrived on the scene, Bulawayo City Council (BCC) firefighters were extinguishing the flames.

_I am still waiting for the guys who attended the incident to come back but this is a police operation._

The government banned privately-owned commuter omnibuses last year after the country declared a nationwide lockdown in an effort to curb the spread of Covid-19.

However, some of the operators have returned to the roads in defiance of the ban resulting in police impounding their vehicles.

Following the circulation of a video on social media of a woman whose child was injured during warfare between police and kombi owners, the minister of Home Affairs, Kazembe Kazembe, said smashing of kombi windows should not be condoned.

He told the Zimbabwe Republic Police (ZRP) to deal with the responsible officers whom he described as errant.