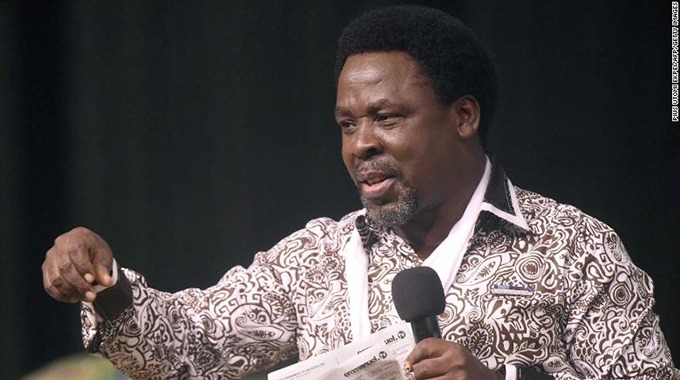 Some local preachers have expressed sorrow over the death of well-known Nigerian pastor and televangelist, Temitope Balogun Joshua, popularly known as TB Joshua who died on Saturday evening at the age of 57.

TB Joshua who was the founder of the Synagogue Church of All Nations (SCOAN) died a week before celebrating his 58th birthday after completing his sermon.

The cause of the death has not been revealed but some reports claim the celebrity preacher had been unwell for two days.

Prophetic Healing and Deliverance Ministries (PHD) leader Walter Magaya told his congregation that he had learnt a lot of things from his father, TB Joshua.

He said although TB Joshua was Nigerian, his life was also being celebrated in Zimbabwe because he had worked hard and was influential. On a post on Yadah TV channel, Prophet Magaya said:

Our life is like a book. There are different chapters that we have we have to go through. This one has the name ‘Pain of Life’.

As much as he is in heaven, I still wanted him here. I love you father senior prophet, TB Joshua. Who will father me now?

You started Yadah Tv for me and always did guide me. Who will call me at 2 am and say correct this and that?

You are a general who set many things in place that generations will continue to copy. As a dear senior Prophet, friend, a Christian brother, a father to many, a prophetic example to me.

Though senior in every way to me, every time we spoke you would be so humble and regarded not your seniority over me, but allowed me time to hear your mind and your humble spirit.

The only thing I have managed or believe I have managed to process this loss is to immortalise your prophetic words you said yesterday after service as you indicated of your own home going, back to the father.

TB Joshua is survived by his wife Evelyn and three children.