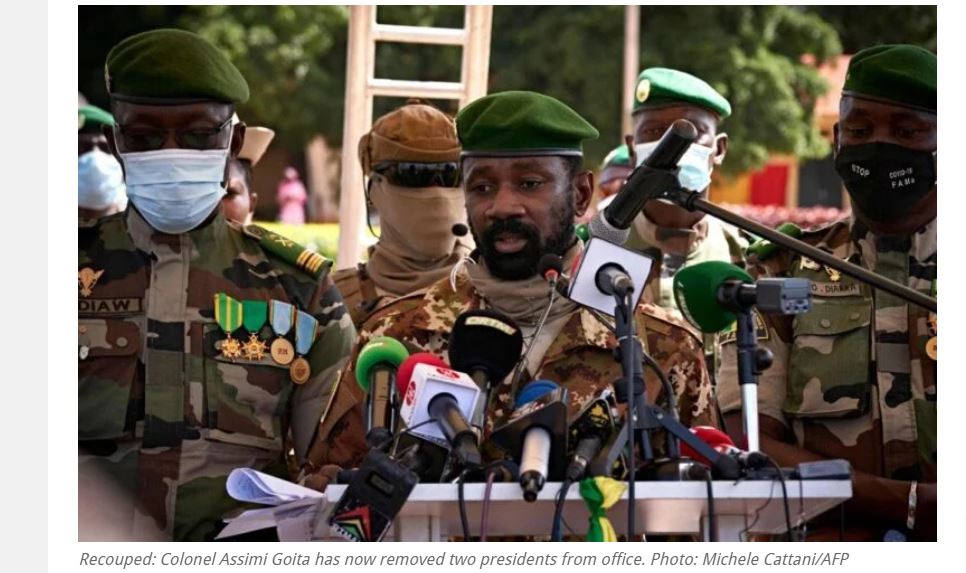 Mali has since independence in 1958 experienced four coups with two (2) of them were both led by the same man, Assimi Goïta and happened in the past nine months.

The 38-year-old Assimi Goïta is a colonel in the Malian Armed Forces.

The most recent coup leaves this vast, landlocked West African country once again embroiled in political uncertainty, even as it continues to battle a long-running Islamist insurgency.

The first time Goïta rose to international attention was on the evening of 18 August 2020 when he appeared on state television to announce the arrest of then-president Ibrahim Boubacar Keita (IBK).

A transitional government was established with Goïta appointing a close ally and fellow military officer, Bah N’Daw, as interim president.

For himself, Goïta created the position of vice-president, with direct responsibility for defence and security.

But relations between N’Daw and Goïta grew tense as the pair competed for influence.

Their relations worsened when the new president announced a surprise cabinet reshuffle earlier this month dismissing several of the junta’s leading figures in the process.

Goïta and his allies within the armed forces arrested President N’Daw and his civilian prime minister, Moctar Ouane and detained them until Thursday in the Kati military base just outside the capital Bamako, leaving Goïta in de facto control of the country.

Goïta is the third eldest in a family of nine children. He attended military schools where his record was faultless.
With specialisations in armoured weapons and cavalry, he graduated from the military academy and, still a teenager, was assigned to the 134th Reconnaissance Squadron in Gao in 2002.

In 2018, he was appointed commander of Mali’s notorious Battalion Autonomes des Forces Spéciales, the US-trained elite special forces unit, and it was from this position that he was able to organise and launch the first coup in August last year.

While there can be little doubt that he wants to remain president, he faces formidable opposition from the international community.