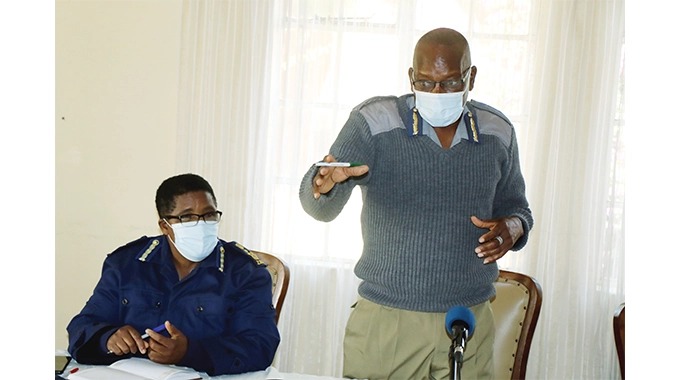 Comm Mbangwa said cases of security guards sleeping on the job are so rampant in the city and some of them do not seem to know their duties.

He was speaking during a meeting between the police, security companies and the business sector in Bulawayo on Monday.

The meeting was held in the wake of rising cases of armed robberies that have rocked the city. Said Comm Mbangwa:

Some of your security personnel have reduced themselves to washing people’s hands at entry points, sanitising hands, as opposed to focusing on security matters.

They are supposed to be alert and surveilling what is happening. Be seen and be known for what you are employed for, if you are a security person at a shop be monitoring for suspicious people, suspicious groups.

Ask yourself why certain people are in the shop and what is the person doing.

Comm Mbangwa challenged security companies to be security conscious and change their behaviour.

Bulawayo’s top cop said police investigations have also led to the conclusion that most cash-in-transit heists are a result of inside information. He said:

People knew that there was money coming from Victoria Falls to Access Finance Bureau de-Change, the moment the money arrived at Access Finance they were raided. Who was telling them that the money had arrived?

That is why we are saying, are our people properly trained in security issues and matters. My wish is for us to put our houses in order.

There might be shortfalls and difficulties but let’s have the police coming in as a support measure.

If you know that you are expecting a lot of money, why don’t you contact the police? And we are going to deploy people who are going to shoot at criminals.

Comm Mbangwa also challenged the business sector to be security conscious, citing the robbery at Choppies Supermarket in Parklands as an example of laxity even by internal security. He said:

The whole thing is, are we security conscious as the business sector? We had a certain gentleman who was in that shop for a very long time, but the people in the shop didn’t care about that.

He was moving in the shop from 8 AM up until the money came (about three hours later) and when the money came, he produced a pistol.

Your closed-circuit television (CCTV) is there but no one is there monitoring who is who.

Following Monday’s meeting, it was resolved that another meeting be held next week.