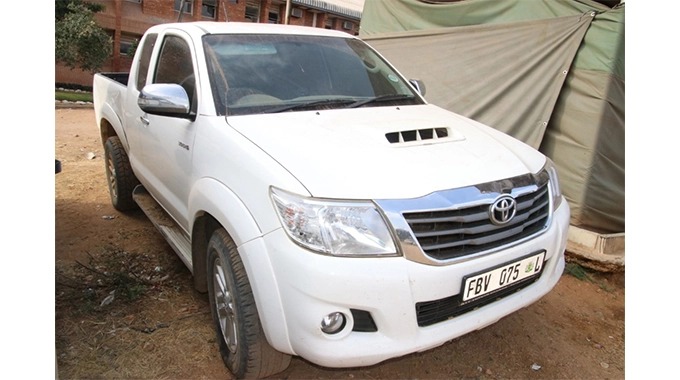 Antonio Sevene Massigue (42) a Mozambican and his accomplice Robert Mbedzi (35), a Zimbabwean from the Tshipise area in Beitbridge were arrested in connection with the smuggling of this vehicle. (Photo Credit: Chronicle)

A Zimbabwean man and his Mozambican colleague were on Sunday arrested by members of the national security task force while smuggling a vehicle stolen from South Africa into Zimbabwe.

National police spokesperson Assistant Commissioner Paul Nyathi confirmed the arrest of Antonio Sevene Massigue (42) a Mozambican national and his accomplice Robert Mbedzi (35), a Zimbabwean from the Tshipise area in Beitbridge.

The duo, who was part of a five-man gang, were arrested near the Tshikwalakwala area, about 135km east of Beitbridge border town.

The vehicle was intercepted less than 10km from the Limpopo River. The car was to be smuggled again into Mozambique.

Asst Comm Nyathi said the value of the Toyota Hilux was yet to be ascertained. He said:

The two are assisting the police with investigations. Our security team comprising the police and members of the national army who are implementing a national operation targeting cross-border crimes received a tip-off concerning the smuggling of the vehicle.

They then lay an ambush at around 5 AM on a road that was being used to transport the vehicle which had five people on board including the two who have since been accounted for.

Asst Comm Nyathi said when the suspects realised that they had been cornered, three escaped while Massigue and Mbedzi were arrested.

Some identification documents and a driver’s license belonging to a South African national were found in the vehicle.

Asst Comm Nyathi said the duo will soon appear in court on smuggling and related charges.