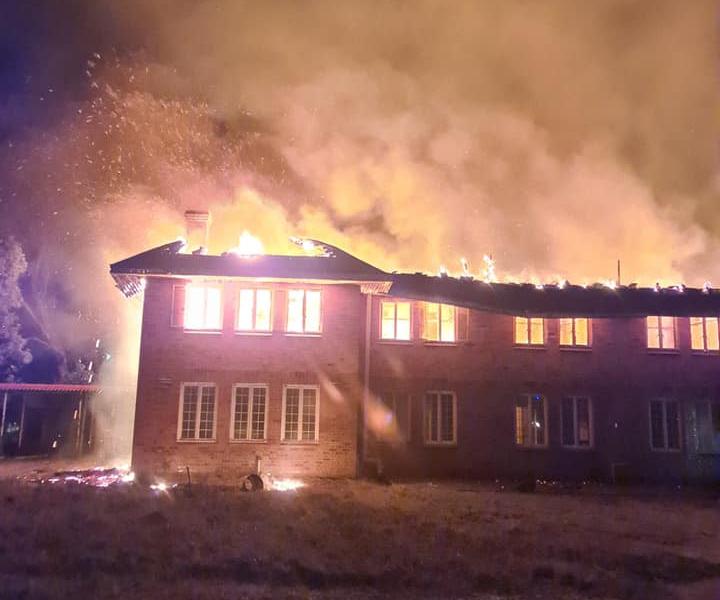 Doctors and other health workers housed in the 39-room double-storey building that was gutted down by fire at Mpilo Central Hospital on Wednesday night, jumped through windows to escape the inferno.

The hospital’s acting Chief Executive Officer, Professor Solwayo Ngwenya revealed that the cost of the damage was an estimated US$500 000. He said:

We were woken up last night, there was a terrible fire and we rushed here and found three fire brigade vehicles already at the scene trying to bring down the fire.

The fire was very ferocious, it spread very quickly throughout the whole building and the roof started curving in and collapsing.

We found that people had jumped out through the windows and had collected some of their belongings. The building houses 30 workers and they jumped through windows.

We were lucky that no one was seriously injured except a doctor who broke an ankle and someone who inhaled some fumes from the smoke.

Deputy Minister of Industry and Commerce, Raj Modi told journalists on Thursday that the fire was caused by an electrical short circuit. Said, Modi:

This is the second time this is happening here. The last time it happened it was an electrical appliance that was left on and this time it’s an electrical short circuit.

In 2019, another fire destroyed an adjacent smaller residence for doctors. An electrical fault was thought to have caused that blaze.

Modi urged the institution’s administration to pay attention to issues such as electrical faults and other reports and move swiftly before the worst happens.

He added that government would assist in rebuilding the broken down hostels.