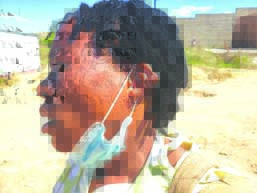 A Macheke white garment prophetess under the Nyenyedzi Nomweye Nguwo Tsvuku says she been a sex worker for the past 8 years without abandoning her “spiritual calling”.

38-year-old Madzimai Cathrine Bvumbe recently told Manica Post that she has been juggling between satisfying her ‘clients’ between the sheets and those at her shrine.

Speaking during a media tour organised by the National Aids Council (NAC), Madzimai Cathrine said she turned to thigh vending due to years of desperation. She said:

I am not proud of it, but I have been in prostitution for years due to desperation. In fact, I only rely on regular clients who contact me on my phone for meeting arrangements.

Prostitution is a risky business. You can’t wish this on anyone, even your worst enemy. Sex workers are at risk of contracting sexually transmitted infections.

In addition to that, interaction with strangers put them in harm’s way. Some are maimed while others are killed during the course of duty.

Madzimai Cathrine revealed that she almost lost her left ear during a scuffle with a client over non-payment of her services.

She also disclosed that she got married in 1999 but unfortunately parted ways with her husband in 2011.

She has to put food on the table for her three children and send them to school.

Madzimai Cathrine said she wakes up early to rush to her shrine to attend to her clients.

She then comes back later in the day to change her church robs into sexually appealing clothes in preparation for her other clients. Said Madzimai Cathrine:

I am convinced that ndakatumwa naMwari (God sent me). It is God’s plan for me to be interacting with these ladies and imparting His Word unto them. It is not by mistake that I am into sex work.