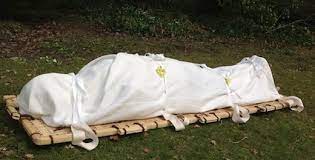 A Mutambara man has appeared before a traditional court after he allegedly took his sister’s burial shroud (fuko) from her coffin and has kept it for 20 years after her death.

According to Manica Post, Titus Mandina is said to have grabbed the shroud from his sister’s coffin just before her burial.

Twenty years later, it is alleged that Mandina carries the shroud everywhere he goes.

It is not clear why Mandina grabbed the cloth as local tradition dictates that the dead are supposed to be buried wrapped in a white shroud.

Titus’ nephew, Charles Mandina told Chief Mutambara’s court that his late aunt is now manifesting through the living, demanding her shroud back. He said:

This is not the first time Uncle Titus has done this. He is in the habit of confiscating dead people’s property.

A lot of dead family members are manifesting on our children saying that he grabbed their property. We were shocked to learn that our uncle is still in possession of the shroud 20 years after our aunt’s burial.

We do not know what he is using it for. Our late aunt is coming in our dreams demanding the shroud back.

During court proceedings, the Mandinas accused Titus of always demanding privacy with the dead during family funerals. The court was further told:

Whenever someone dies in the family, Titus makes sure that the person is not buried in his absence.

Whether he is in Harare or Mutare, when he hears about the death of a family member he quickly rushes back home and demands to view the body privately.

It is so scary but there is nothing we can do because he is the family’s father figure.

Chief Mutambara said his court needs to ascertain what takes place when Titus asks for privacy with the corpses.

One Comment on “Mutambara Man’s Obsession With Corpses Worries Family”