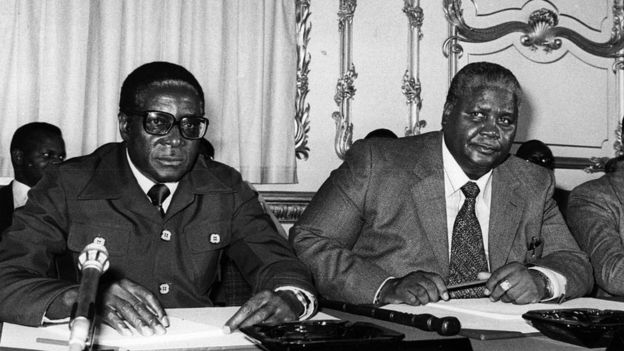 Former Mines and Mining Development Minister, Walter Chidhakwa has denounced Chief Zvimba for his alleged role in the alleged exhumation of the remains of former President Robert Mugabe.

Chidhakwa who is related to the Mugabe family said Chief Zvimba and the plaintiff, Tinos Manongovere’s actions were driven by greed for money.

He made the remarks in an interview with NewZimbabwe after summons attributed to Manongovere which ordered former First Lady Grace Mugabe to attend Chief Zvimba’s court had made rounds on social media. Chidhwakwa said:

_The chief has lost respect by allowing himself to be dragged into this shameful drama because of the love of money._

_Where does the plaintiff fit in all this? Manongovere is a distant relative of the Mugabe family, as he doesn’t hail from the Chidziva chieftainship where Mugabe hails from._

_If it’s money he wants, he must work and get it instead of getting money by selling the body of the dead. We know who is behind this, Tinos is just a tool to get to Mugabe’s grave which we won’t allow by all means._

_If there is something which was not done right why not summon us? Mai Mugabe (Grace) is just a daughter-in-law in the Gushungo clan. She does not have any say in making decisions on behalf of our family._

_Moreover, the only people who can decide on Mugabe’s remains whether to exhume or not are his biological children, Bellarmine, Bona and Robert Junior and no one else._

Chidakwa said he personally told President Emmerson Mnangagwa of Mugabe’s wish to be buried at his rural home and not at the National Heroes Acre as the State had wished.

Manongovere, who is a cousin to the late former president confirmed approaching the courts but denied being persuaded by anyone to initiate the legal proceedings. He added:

_At this stage, I will not say much as there has been a lot of lies going around social media and you journalists are spreading lies. I will not answer your questions. You will be answered on what you want to know by coming to court on the date._

The summons said the court session is set for the 20th of May 2021 at Gonzo Guzha Hall, Murombedzi growth point. Meanwhile, Chief Zvimba has since distanced himself from the summons. More below

One Comment on “Chief Zvimba, Plaintiff, Denounced Over Mugabe Exhumation”