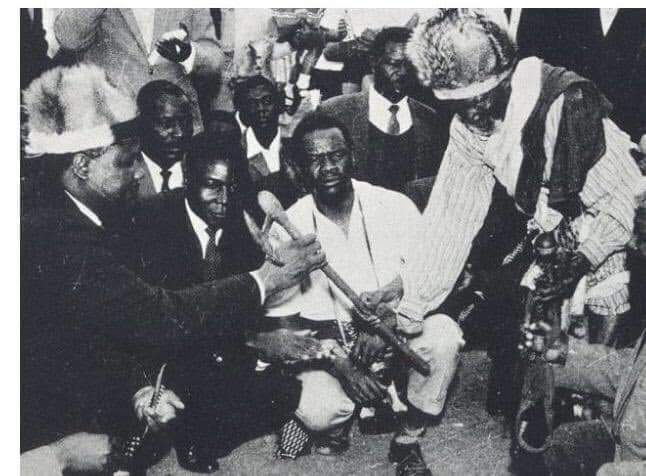 This comes after Chief Zvimba summoned former First Lady Grace Mugabe to a traditional court to force the exhumation of Mugabe’s remains for proper reburial.

Mugabe’s exiled nephew Patrick Zhuwao accused President Emmerson Mnangagwa of sponsoring the attempt to have his uncle’s remains exhumed as he believes the veteran leader was buried with a sceptre that has spiritual powers which enhances a leader’s ability to govern.

Zivhu claims he was present when the sceptre was handed over to Kasukuwere because he “was chosen”. Zivhu tweeted this Friday:

(The sceptre was handed over to comrade Kasukuwere and I was there when it happened. The sceptre is of immense value, there is power on it. Chamisa was only bluffing. The old man was angry with what happened. But the old man’s sceptre is in Kasukuwere’s custody. He was chosen, but as to what the sceptre is used for, I don’t know.

… the reason Emmerson Mnangagwa wants to exhume the mortal remains of president Mugabe is that he has been looking for what is referred to as tsvimbo yaMambo/[induku yeNkosi], which is really the sceptre that he believes will give him the authority to be the leader of Zimbabwe.

Emmerson Mnangagwa, in my presence and the presence of my two colleagues, has indicated that he believes that there are 16 traditional leaders who will effectively anoint the person that will be able to effectively govern Zimbabwe and he believes that president Mugabe had that tsvimbo yehuMambo/[induku yobuKhosi] (royal sceptre).