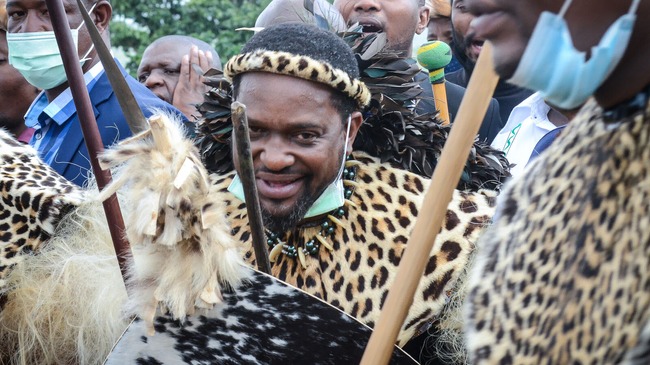 The King officially registered the marriage with the Department of Home Affairs last Thursday, a day before his mother Queen Regent Mantfombi Dlamini-Zulu was buried.

The King’s marriage, to Mayisela, 36, who is the mother of his two children (3 and 9), is likely to end claims in some quarters in the Zulu royal family that he could not ascend to the throne as he was not married.

A high-powered delegation from KwaKhangelamankengane palace in Nongoma is expected in Newcastle, northern KZN around 4 pm and will later drive back to report to the king about how the process went.

IOL reported a royal source saying the Mayisela family demanded eight cows and R50 000 in cash. The monarch reportedly agreed to pay this on Thursday at 4 pm. The source is quoted as saying:

As I am speaking to you right now we are inside the farm selecting the best cows to present them to the Mayisela family at 4 pm today. We will not sleep over, instead, we will present our cows and come back. They demanded eight cows and R50 000 in cash and we happily obliged.

King Misuzulu KaZwelithini has two other children with other women. It is not clear for now whether he will marry them as well or not.