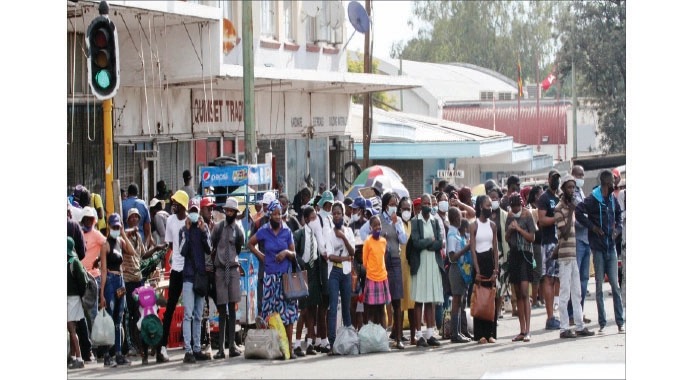 Residents including school children, with no social distancing, wait for transport at an undesignated area along 6th Avenue in Bulawayo on Friday, 30 April 2021.

Private commuter omnibus (kombi) operators will not be returning to business anytime soon as Government continues to reiterate its position of sanity to the urban transport sector.

Minister of Local Government and Public Works July Moyo on Saturday said companies that had engaged private transport operators must do so through the Zimbabwe United Passenger Company (ZUPCO).

Moyo made the comments in an interview with State media on the sidelines of handover and launch of the Local Authorities Database System (LADS) and Ward Profiles for Matabeleland and Midlands provinces yesterday. He said:

ZUPCO affiliated commuter omnibuses are the only ones allowed to operate, that is the policy in place and it has not changed.

Anybody who has their own buses and wants to operate must go and register with ZUPCO.

This all is to ensure that we manage urban companies through one company but with many owners.

All we are saying is that we want to bring sanity to the whole system.

Even companies that want to hire buses for their workers should do so through ZUPCO alone and not hire private companies.

Last week hundreds of people, including schoolchildren in Bulawayo, were left stranded as police impounded staff buses, vehicles hired to ferry school children that are not registered under ZUPCO and pirate taxis.

This resulted in chaos as most school children who are ferried to schools in hired buses were stranded while some workers failed to get to work in time.

The private-owned commuter omnibuses have been banned since the lockdown was effected on 30 March last year as part of measures to contain the spread of the coronavirus and only operators affiliated with ZUPCO were allowed to operate.

However, members of the public are now facing massive transport challenges as the ZUPCO buses are inadequate.