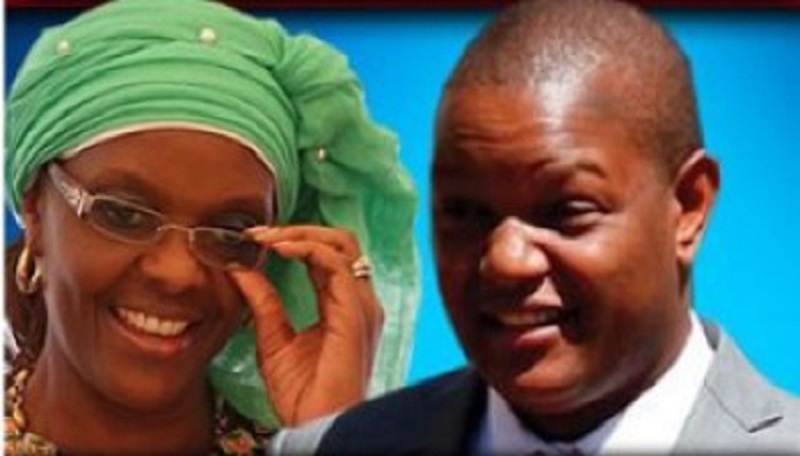 An associate of Russel Goreraza, the son of former first lady, Grace Mugabe, manhandled a journalist with The Herald and grabbed her phone outside the Bindura Magistrates Court where they appeared facing theft charges.

The journalist, Fungai Lupande, was taking pictures of Goreraza and his co-accused, Paul Sithole (45), Aaron Muchenje (31) and Trymore Madzitire (36), who were leaving the court after their hearing.

Grace Mugabe’s son is facing theft charges after he allegedly ordered the removal of a gold processing plant worth US$130 000 at Tian Bao Mineral Industry in Mazowe. The farm is owned by the former First Family.

Goreraza and his co-accused are on $20 000 bail. The four appeared before Bindura magistrate Mr Tinashe Ndokera, who remanded them to May 19 for a trial date.

Journalist Lupande said as the quartet left court, she started taking pictures and a man who is not part of the accused, charged towards her and grabbed her hand before grabbing her cell phone. She said:

He ordered me to delete the picture, before scrolling my cellphone which was not locked. After failing to locate the pictures, he threatened to slam the cellphone onto the ground or delete all the information.

Attempts to get back the cell phone were fruitless as he went into his vehicle with it and threatened to leave. I then approached the lawyer who was representing Goreraza and his co-accused, and he demanded to see my media accreditation card.

Upon producing the document, he intermediated between me and the man.

The lawyer, whose name I didn’t manage to get, asked me to delete the pictures because the man who was ‘aggressive’ was not part of the case.

Lupande said she turned down the request and as the man handed back the cell phone, he said:

Now I know who you are, if these pictures are published you will see what I can do to you. I don’t hesitate.

She then lodged a report at Bindura police station.