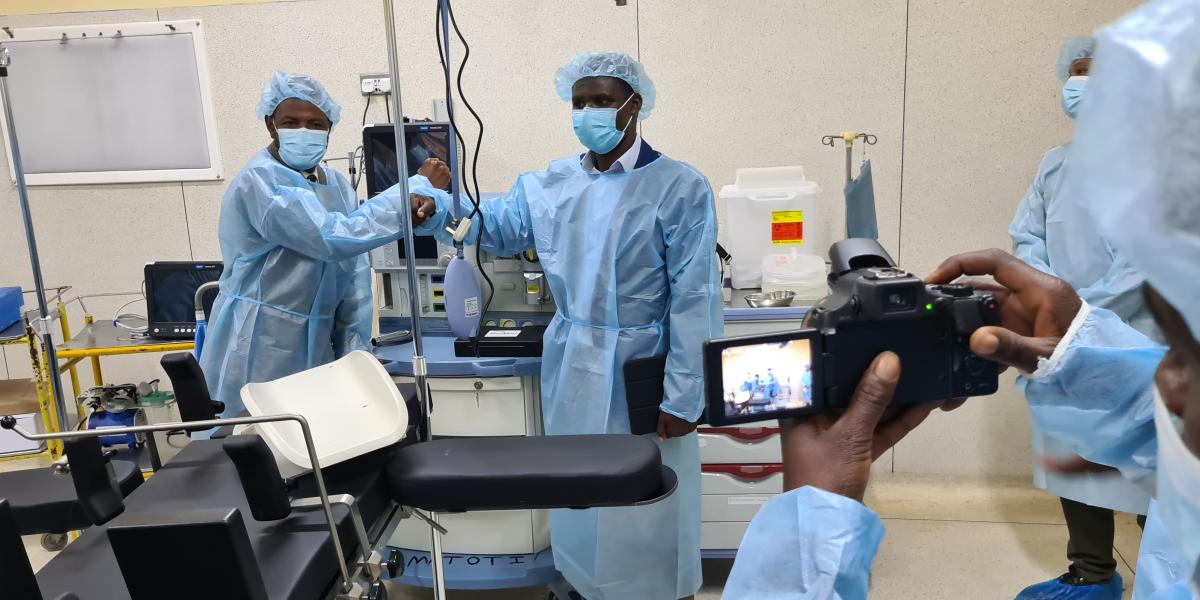 This work by Stanbic Bank, for which the theatre equipment was imported at a cost of USD37000 and the refurbishment worth ZW$ 2 million, was pivotal in rescuing the dire situation for expecting mothers from across the Harare Metropolitan Province and beyond.

The purchase of this equipment will ensure that the two operating theatres are fully functional following the collapse of the anaesthesia equipment in theatre 1 a few years ago.

Stanbic Bank Chief Executive (CE), Solomon Nyanhongo said the donation by Stanbic Bank is part of its comprehensive CSI health-related initiative whose flagship project is called USIZO-RUYAMURO launched in 2019. USIZO-RUYAMURO was launched at the reopening of the Cancer Association of Zimbabwe halfway house located at Sally Mugabe Central Hospital, where Stanbic Bank refurbished the facility.

The flagship project seeks to support and facilitate the growth and sustainable development of public health services in Zimbabwe.

Nyanhongo said Stanbic Bank also supported Sally Mugabe Central Hospital with a donation of analgesics in January 2019 which went a long way in alleviating the shortages that were at the hospital at the time.

He said it is at that donation in 2019, where hospital authorities alerted Stanbic representatives to the need for anaesthesia equipment for theatre 1 as only one of the two theatres was functioning. This situation was resulting in an increased number of stillbirths and other avoidable maternity-related complications.

The hospital authorities also requested the renovation of the recovery room which had a leaking roof, as this would help further reduce the lag time between patients coming in and out of the operating theatres.

He said Stanbic Bank was pleased to have been able to make such a donation during the COVID-19 pandemic is causing havoc not only in this country but throughout the globe. The Bank had to persevere through the lockdowns to ensure that the theatre is up and running as soon as possible.

“Such determination and never-say-die spirit is the hallmark of Stanbic Bank which has seen us introduce numerous products to ensure that our customers are not compromised by COVID-19. While COVID-19 has affected our operations like any other entity, Stanbic Bank’s comprehensive CSI initiatives will continue as we fulfil our commitment to supporting the communities in which we operate,” he said.

The Sluce Room’s whitewash trough and leaking p-trap was removed and replaced while the mosaic tiles were replaced with new ceramic floor tiles. The Maternity theatre was fitted with a table, stainless steel rail and dropped poles for hanging drips.

“To ensure a conducive working environment, we painted the Sister-In-Charge’s office and fitted it with new wall cupboards and curtain rail. We also gave a fresh coat of paint to the outside passage,” said Nyanhongo.

Sally Mugabe Hospital Acting Chief Executive Officer (CEO), Christopher Pasi said the donation by Stanbic bank will contributing significantly in preserving the lives of newly born babies and the mothers who would have just delivered as well as during delivery.

He said it had been a tough few years utilising one operating theatre and the new equipment has lifted the gloom that had surrounded the maternity wing.

“Words fail us to describe the impact these machines have on the maternity wing. When people say congratulations after a baby is born they will be celebrating the survival of both the mother and child due to potential complications aligned to giving birth and these machines will ensure many mothers are congratulated for bringing life into the world. We are so grateful to the blossoming partnership between ourselves and Stanbic Bank which is now spanning years with the bank having rescued us when we need pain killers for mothers after their operations,” said Dr Pasi.

He said being a central referral health institution they receive some of the most challenging cases of expecting mothers and the equipment will be pivotal in attending to these cases.