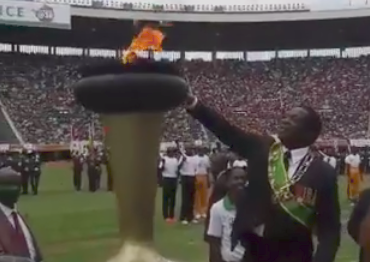 President Emmerson Mnangagwa’s spokesperson, George Charamba has said contrary to some reports, Zimbabweans liberated themselves from Britain, of course, with help of other states.

He made the remarks on Twitter this Saturday ahead of Zimbabwe’s 41st independence celebration on Sunday. We present his Twitter thread below.

Today it fortifies its sovereignty through support and solidarity of pretty much the same countries which supported its freedom struggle. Opposed to that struggle and thus to the advent of 18th were western Govts who mobilized mercenaries, covertly supplied weapons and opposed sanctions against Rhodesia. They also bolstered the busting of sanctions by Rhodesia, while winking their eyes as Rhodesians accessed their markets for earnings which contributed to the Rhodesian war effort.

After Independence and as Zimbabwe sought to put content to its freedom through Land Reforms, the same western governments ganged up to impose crippling sanctions which continue to saddle us, a good 21 years after their imposition. No amount of phoney gestures of charity should
be allowed to overwrite this history. We know our allies, partners, friends and heroes. Above all, we know our idols.
Those who claim to have liberated a few acres of our borderlands should be reminded quiet, progressive Nations helped liberate our whole territory for no loans or moralizing. They are quiet; continue to support us; they don’t impose sanctions on us.

False narratives by retrogressive media funded by the West and hand-held by the same West editorially should never fool us.

2 comments on ““Zimbabwe Was Liberated By Zimbabweans” – Charamba”