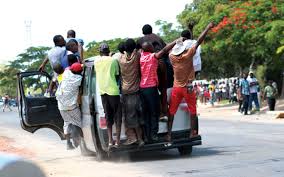 Former tourism workers who have been rendered jobless due to the effects of the coronavirus are believed to be the majority of pirate taxi drivers (Mushikashika), who have flooded roads in Victoria Falls.

The Chronicle reports that there are no commuter omnibuses (kombis) in Victoria Falls as residents prefer smaller vehicles which they say are quicker.

Mushikashika taxis are threatening to push registered operators out of business as they do not use designated pick up points in town and continuously run between routes for passengers.

The Victoria Falls Taxis Association (VFTA) has appealed to Government for a waiver of some vehicle registration fees.

VFTA chairman Victoria Mwembe told Chronicle that some of the Mushikashika taxis were once registered but are now operating illegally because owners cannot afford registration and licence fees amid low business. He said:

People are desperate and looking for money which is why we have been appealing for exemption of some fees.

As a taxis association, there is nothing we can do about the unregistered vehicles because a majority of vehicles here are not registered as people cannot afford to take their cars to VID or pay insurance fees.

We had wished to get assistance from Government because it is not a secret that Victoria Falls was the hardest hit by COVID-19.

Meanwhile, Matabeleland North police spokesperson Inspector Glory Banda said traffic police are committed to ensuring sanity prevails on the country’s roads in the best interest of reducing road carnage and a host of other offences.