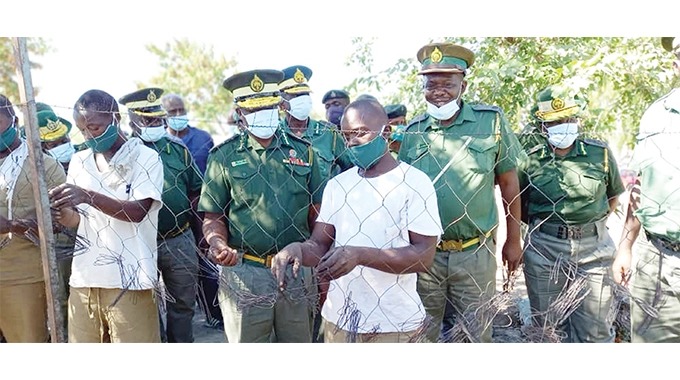 ZPCS Commissioner-General Moses Chihobvu tours Beitbridge Prison on 13 March 2021. The Commissioner General is on a nationwide tour to assess the state of affairs at correctional facilities. — Picture by Thupeyo Muleya

President Emmerson Mnangagwa has approved amnesty on prisoners serving lighter sentences or who have served over one-third of their sentences.

The move follows a request by the Zimbabwe Prisons and Correctional Services (ZPCS) who are keen on decongesting the correctional facilities for controlling the spread of the coronavirus.

Speaking during an interview yesterday on the sidelines of his tour of Beitbridge Prison, ZPCS Commissioner-General Moses Chihobvu said:

His Excellency, the President has today signed our request to offer amnesty to some prisoners.

What is only left is to gazette the new order so that we may be able to release those who qualify.

… I don’t have the statistics offhand, but we are hopeful that the amnesty will help a great deal in decongesting crowded correctional facilities.

At the same time, I want to urge those that will benefit from the clemency to take this as a second chance for them to lead a better life.

Inmates in the country are graded into four classes, A-D and those in Class D are the ones serving long-term sentences ranging from seven years and above, including those who would have committed serious crimes some of which include murder, armed robbery, fraud, or rape, among others.