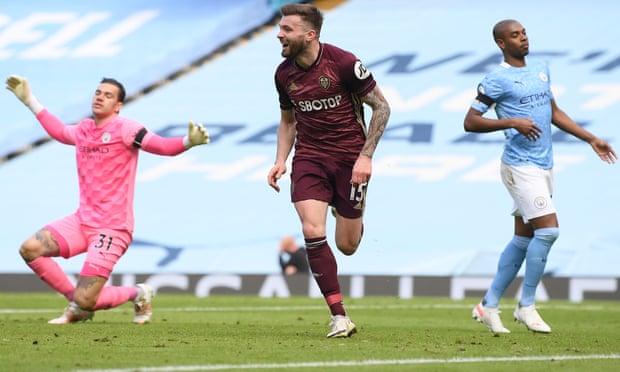 Stuart Dallas (centre) celebrates his stunning late winner after Leeds had been on the back foot for much of the second half. Photograph: Michael Regan/Getty Images

Northern Ireland midfielder Stuart Dallas gave the visitors a surprise lead three minutes before the break and then scored the winner in injury time.

Leeds captain Liam Cooper was sent off for a tackle on Gabriel Jesus before the opening period was over.

City had to wait until the 76th minute for their equaliser when Ferran Torres drove home his first Premier League goal since December.

Leeds are now 10th on the log with 45 points from 31 games while City remain with 74 points, 14 points ahead of Manchester United who are on 60 points having played 30 games, two less than Manchester City.

The value of the victory increases because it was achieved in a game where we were dominated and demanded character, effort and personality.

We did not create enough for the forwards. It is part of the game.

In the last 10 minutes, they had other chances, they are fast and can do it.

When they defend in the way they were doing you have to stop them running and we did not do that.