The Permanent Secretary of the Public Service Commission (PSC), ambassador Jonathan Wutawunashe has said the government is committed to ensure a living wage for workers.

He made the remarks after a meeting between the government and the Apex Council which represents workers had failed to agree on workers’ salaries after workers rejected the offers the government had tabled.

We present Wutawunashe’s statement below.

1.0 Government is pleased to advise that the meeting between workers’ representatives and the Government team in the National Joint Negotiating Council (NJNC) continued in earnest and in a very honest way. Government expressed constraints emanating from –

a) a prolonged economic shutdown period within the country owing to the lockdown measures instituted to manage the Covid 19 pandemic. during which revenue generation was reduced to virtual insignificance:

b) payment for vaccines against Covid-19 pandemic, with the aim of administering doses to at least 60 percent of the population. thus achieving a measure of herd immunity

Even as Government faced these constraints, it remained committed to fulfilling the payment of salaries and benefits to all civil servants. including those who were at home during the long periods of national lockdown restrictions.

4.0 While continuing with the crucial negotiations. Government wishes to implement payment of increments from what is immediately available to support its workforce. without prejudice to the negotiating process, which must continue. It needs to be borne in mind in that regard that some civil servants do not belong to any union, and might not wish to forgo the immediate improvement of their emoluments pending the conclusion of negotiations in the NJNC:

5.0 Government is committed to the collaborative task of developing a realistic roadmap that will guide deliberations as we move ever closer to the attainment of Vision 2030

7.0 Govemment reiterates its commitment to continuous and fruitful engagement with its workers towards improving conditions of service and ensuring a living wage for its valued workforce

In that spirit. Government welcomes the opportunity to keep engaging with workers’ representatives in the NJNC. the forum established officially for the discussion of conditions of service for all civil servants. 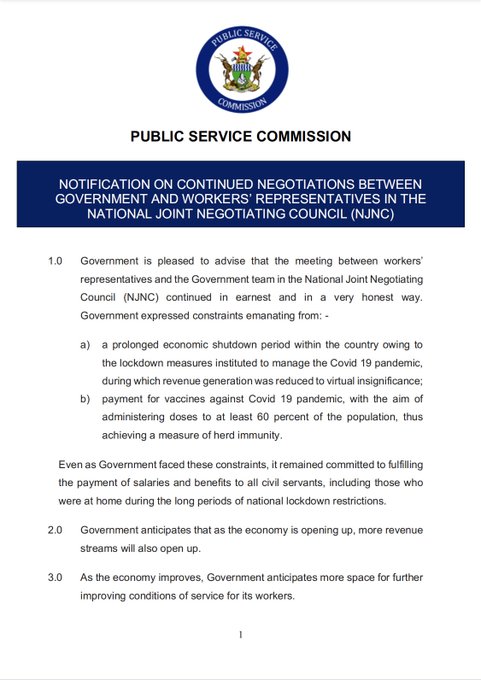 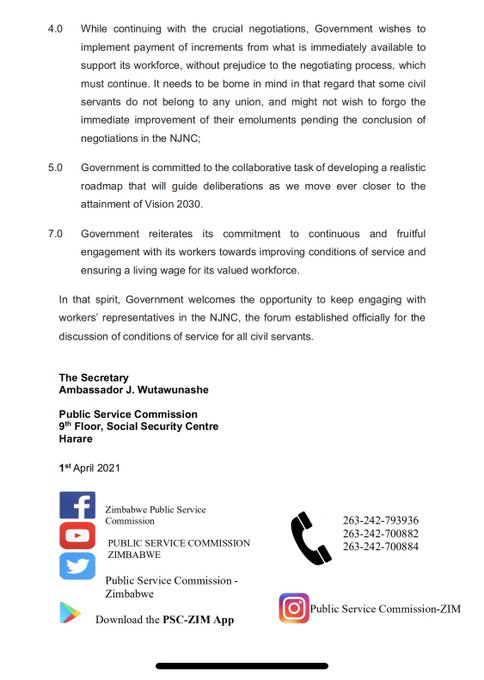