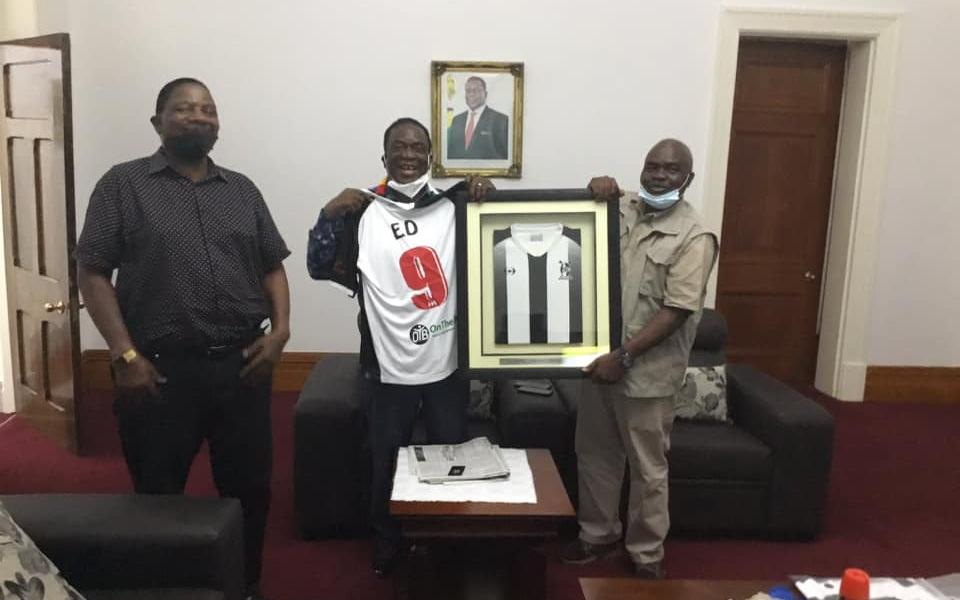 President Emmerson Mnangagwa receives a personalised club replica jersey as a token of appreciation for the gold mine offer from Highlanders F.C. executives

Tshinga Dube, a long time Highlanders benefactor and life member, has allayed fears that the club had been captured by the ruling Zanu PF party after the government recently granted it a mining claim.

Angry Bosso fans have vented their feelings on social media against what they consider to be the hijacking of the club by the ruling party.

The fury was triggered by club officials’ offer of a personalised club replica jersey to President Emmerson Mnangagwa as a token of appreciation for the gold mine offer when he was in Bulawayo last month.

But speaking at the club’s annual general meeting on Sunday, Dube said the club belongs to “the people” regardless of political affiliation. Said, Dube:

I have heard that social media is abuzz with some people accusing others of selling the club to Zanu PF. That is not true.

Football belongs to the people regardless of political affiliation. It is known that the Queen of England supports Liverpool.

There are Highlanders members who are politicians and some are civil servants and so forth, but we cannot look at things in this way.

We have Omega Sibanda (Zanu PF MP), he is a politician, but he is a member of Highlanders.

We have Justice (Nicholas) Mathonsi here and he is a member of Highlanders.

So it is not correct to mix these things because even Dynamos as it is has a number of politicians.

Does it then mean that if you are in the Highlanders executive committee then you must buy Zanu PF membership cards? No! Let us correct this mentality.