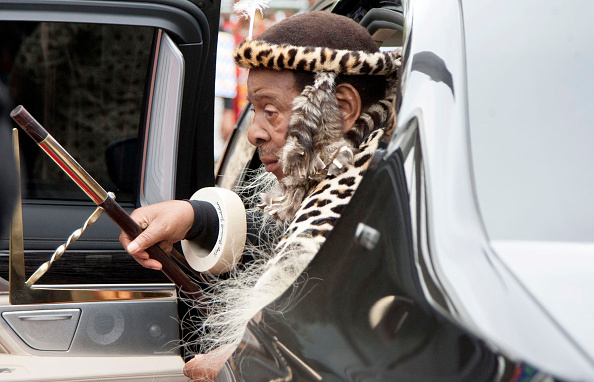 KWADUKUZA, SOUTH AFRICA – SEPTEMBER 24: Zulu King Goodwill Zwelithini is seen during Heritage Day celebrations on September 24, 2019 in in KwaDukuza, South Africa. While addressing the crowds, King Zwelithini expressed concerns about the scourge of gender-based violence, and appealed to the the government to do more to ensure the safety of women and children in communities. (Photo by Gallo Images/Photo by Khaya Ngwenya/Gallo Images via Getty Images)

Zulu Traditional Prime Minister Prince Mangosuthu Buthelezi has announced that the late Zulu King Goodwill Zwelithini kaBhekuzulu, who died on Friday last week, will be buried in a private funeral on Wednesday night, followed by a memorial on Thursday.

Buthelezi also said only a select group of men from the Zulu Royal house will participate in the burial. He said:

After a very protracted meeting, the summary was that there was actually a consensus that the king actually requested that he should be buried at night as happened when his two late sons were buried.

Prince Butho and Prince Lekthula were buried at night. And he said to be buried by men only. It should be a private ceremony of the royal family.

We are fortunate that one of the sons-in-law of the King phoned the President whilst we were engaged because it is known that His Excellency President Ramaphosa declared a State Funeral Category 1 for His Majesty.

So clearly the President has confirmed that there won’t be what is called a state funeral but nevertheless, the Presidency will support what can be described as a memorial service on Thursday.