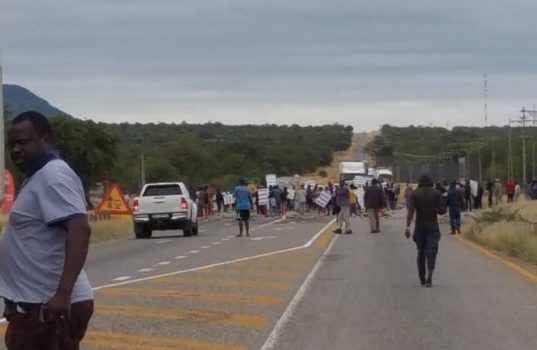 South Africans based in Musina yesterday blocked traffic from crossing to and from Zimbabwe as they protest the government of Zimbabwe’s delay in reopening the border, the Chronicle reports.

A source that spoke to the publication about the Musina Protest said taxi operators lined up their vehicles at the border in a manner that prevented traffic from crossing on either side:

They are saying the rigid trucks (light commercial) and other Zimbabwean registered vehicles must not be allowed entry into that country until Zimbabwe fully reopens its borders.

In addition, they are demanding that the cross-border transporters known as Omalayitsha be allowed to transport goods into Zimbabwe

Another source spoke to the publication and said the South African side of the border had to close as they were afraid the protest would spill over into the border.

Taxi operators are reportedly demanding that the government reopen the border as they rely on traffic from Zimbabwe as the primary source of their business according to an agent that spoke to Newsday:

They want the Zimbabwean government to open its side of the border to give them economic activity. Minibuses which ply the Musina-Johannesburg route rely mostly on Zimbabweans.

The minibus and taxi operators believe that by not opening its border with South Africa, Harare was killing their source of livelihood.

A demonstrator at the Musina Protest that spoke to Newsday said why were airports open and borders closed:

We are also questioning why airports are not closed. Is the law only for the poor? Let them also close the airport