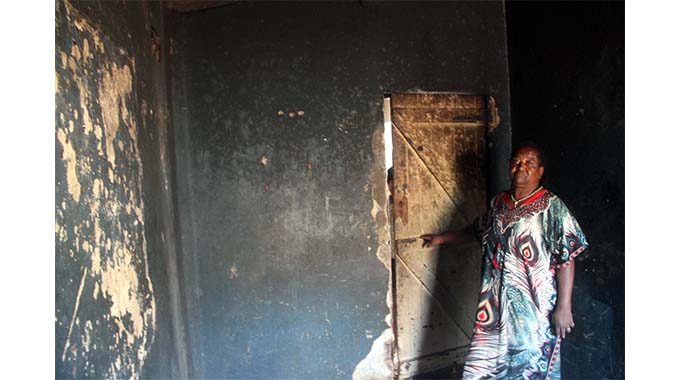 Margret Mangwiro inside the burnt bedroom, (Picture 2) she shows the windows whose panes were shattered by the explosion and the container that allegedly had the fuel

Twenty people escaped death by a whisker when a house in Bulawayo’s Mpopoma suburb caught fire following a petrol explosion around 9 AM Sunday morning.

One of the victims, Lenxious Sibanda (27) of New Lobengula, reportedly stole 20 litres of petrol belonging to his parents who are based in Botswana and intended to sell it on the black market.

Lenxious then took the stolen fuel to Mpopoma where he hid it at a friend’s family house.

His sister, Leterevy Sibanda revealed that the petrol was meant to be used by their parents to fuel their car for a trip to their rural home in Nyamandlovu during the Easter holiday. She said:

He took the fuel without permission from our parents and the intention was to sell it on the black market.

We were shocked when his friends came to inform us that he had been rushed to hospital after he was burnt in a petrol explosion at a house in Mpopoma.

The owner of the house, Margret Mangwiro told the Chronicle that she suspects Lenxious could have been smoking in the room. She said:

It seems Lenxious was smoking a cigarette in the room, which had a container of fuel resulting in the explosion that nearly cost our lives. There were 20 people in the house including my grandchildren who had visited us for the weekend.

Mangwiro said her neighbours swiftly reacted and helped to douse the inferno and her grandson, George Mangwiro and his friend Wellington Mukonza rescued Lenxious who was trapped in the house. Said Mangwiro:

It was a terrible sight as my neighbours joined us in putting out the fire using sand and water. My grandson and his friend took the risk and got inside the room where the fire had started to rescue Lenxious who was trapped inside.

Lenxious sustained life-threatening burns and was rushed to Mpilo Central Hospital where he is admitted.

The explosion shattered window panes and the fire burnt blankets, a mattress and a headboard.