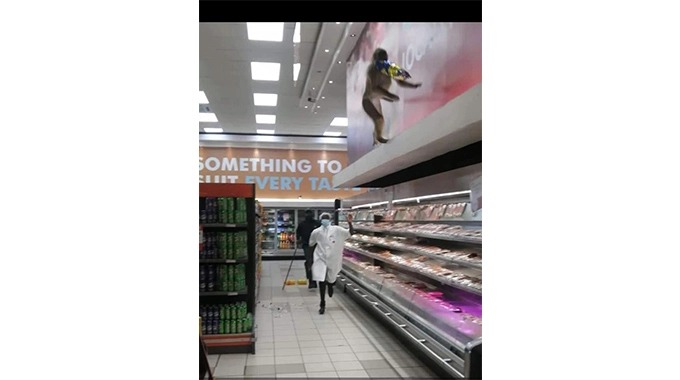 One of the many menacing baboons (top, right of picture) inside a supermarket in Victoria Falls recently

Baboons are terrorising businesses, residents and villagers in Victoria Falls by breaking into shops to steal foodstuffs and ambushing people and snatching food from them as well as “cleaning” maize fields.

A few days ago a baboon caused a commotion when it entered OK Supermarket and stole a packet of chips.

Despite frantic efforts to scare it away, the baboon tried to go in through the front door and later returned to enter through the roof and jumped into the shop through the ceiling.

The animals’ belligerent attitude has been attributed to hunger as they cannot find fast-food leftovers in rubbish bins.

Trash cans are always empty because of a lack of tourism activity and restricted operation of restaurants due to the coronavirus lockdown.

Speaking to Chronicle on condition of anonymity, some residents said the baboons had turned Victoria Falls into a “war zone”. An employee at one of the shops said:

We clean baboon poo in the office almost every day. I think they had mastered the lockdown business hours and would enter the shops once people knock off.

Lately, they have been breaking into shops even in the presence of people. They broke two window panes into our shop and have been sneaking inside and mess around before entering the ceiling.

Sometimes we see them peeping inside wanting to come in.

The Chronicle reported a source saying it is now risky to move around carrying food as the baboons can differentiate plastic bags from food outlets from those from other shops. Said the source:

Some now camp in front of Chicken Inn or OK shops and snatch whatever they see people carrying. One baboon recently caused a stir when it entered the OK shop, went on top of a butchery fridge before jumping onto a nearby shelf where it snatched a packet of chips and fled.

On another day they charged at a man who had just bought two pies and he threw them down as he fled.

The Zimbabwe Parks and Wildlife Management Authority (ZimParks) has been urged to deal with the baboon menace as there are fears that the primates will disrupt tourism in the city.

Chief Whange said some villagers in Kasibo are staring hunger after their maize crops were eaten by marauding baboons.